Randall Emmett says he’s taking the high road when it comes to his split with Lala Kent, despite his actions (and wandering eye) allegedly being the reason he and the Vanderpump Rules star called it quits.

As The Ashley previously reported, Randall and Lala ended things in October following allegations that Randall had been unfaithful. After the breakup, Lala– who welcomed daughter Ocean with Randall in March 2021– moved out of the home she and Randall once shared and has since publicly slammed her ex for not only cheating, but allegedly proposing with a “fake” diamond ring, not being able to satisfy her sexually, and displaying multiple red flags throughout their nearly six year relationship.

After months of near-silence, the producer and pickle-ball enthusiast finally opened up about the split this week on Shahs of Sunset star Golnessa “GG” Gharachedaghi’s Genuinely GG podcast, claiming he will never talk badly about Lala publicly “no matter what happens in life, because she’s Ocean’s mom.”

“I just have to always look at the big picture,” he explained on the podcast. “I just can’t talk badly about the mother of my child. I just can’t do it– no matter what is said about me.”

Though he vowed to abstain from talking trash about Lala, Randall went on to claim both he and his ex had made “mistakes” in their relationship.

“There’s always two sides to every story, but I’m just not ever going to take that to the public because I just can’t get involved in all of this,” he said. “I’ve made mistakes, she’s made mistakes, but I’m never going to bring that to light because … for me, I just don’t feel it’s appropriate.”

While seemingly acknowledging the slams his ex has served him in the press in recent months, Randall said he can’t tell Lala what to do, noting “she’s a strong woman.” However, he said he hopes in time it will “mellow out.”

Randall– who also shares two daughters with his ex-wife, Ambyr Childers– said even if things do not “mellow out,” he’ll keep his head down and focus on being a dad and working.

Randall went on to say he was grateful for his relationship with Lala because it brought them Ocean.

“ …she wouldn’t be here if it wasn’t for us,” he said. “And that is worth all of the turmoil and the heartbreak and the pain that has gone on … I’m sad, but at the same time, I have Ocean, she has Ocean, and I think we both would say that we have her out of this and how could we not be grateful?”

GG’s podcast episode with Randall comes just months after the ‘Shahs’ star criticized Lala for speaking negatively about Randall in the press, noting Lala’s claim that she saw many “red flags” throughout her relationship with the producer.

“ … Walk away and stop complaining unless you’re ready to take accountability for choosing to stay after the first ‘red flag’ because all of this press/media s**t ain’t cute when it’s about the father of your child,” she wrote on social media. 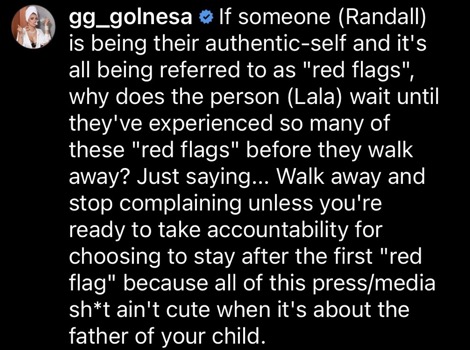