From being jolly about being jobless to posting clickbait that’s absolutely classless, the stars of the Teen Mom franchise (both past and present) have been keeping themselves busy lately! In an effort to keep you up-to-date on the latest Teen Mom OG and Teen Mom 2 news, The Ashley brings you the Teen Mom News Pile.

David Eason brags about not working.

David doesn’t have a job and he’s damn happy about it!

Mr. Jenelle Evans hit his Facebook on Thursday to brag about the fact that he doesn’t work and can, instead, spend his days cleaning the animal guts from his fingernails (probably), raking on The Land and posting vomit-inducing content on OnlyFans.

David also let people know that— before he married Jenelle, he did actually have to work for a living. He went into detail about the job he once had– working as a welder at a plant. He also informed everyone that he used to clean sewer pipes and vacuum the crap out of them.

First, he addressed the poor working schmucks who weren’t lucky enough to get their hairy claws on an MTV reality TV star— and their money.

“Honestly I hope y’all have a good day at work bc I know how bad it can suck!” David wrote. “Most of y’all don’t know this but I had what you would call a ‘good job’ as a welder and had just started working on the nuclear side of General Electric, welding pipe for the plant. I hurt my back so bad at work that I had to quit but they gave a lay off so I could at least draw unemployment. I can never get that job back because they know my back is hurt too bad to continue that type of work.”

David– who, in the past, has also used his vitiligo skin condition to explain why he is sans employment— went on to write about another one of his pre-Jenelle jobs.

“I worked for a friend for a few years after that and he has what you call a ‘pipe cleaning company.’ We cleaned sewer pipes and lift stations that are full of poo. Not the worst job but definitely the NASTIEST job you could probably ever do. Short days and good pay were not enough to keep me climbing into those poopy holes, sucking out the sewage with giant vacuum hoses.”

David encouraged other people to not work very much so that they can spend their day showing their kids things.

“I’m so thankful to be where I am at today and can spend time with my family everyday,” he wrote. “…Spending all your time at work is not natural. Kids these days learn more from outside sources than they do from their own parents.”

“I couldn’t be a stay at home dad without all of you who support us! I am so thankful for every one of you! Every person that does support us and even the haters, thank you so much from the bottom of my heart!”

“You’re a lazy bum who mooched off his wife until you & she had to resort to OnlyFans,” one person wrote in the comment section. “… Jenelle even pays your child support, you low life.”

“Glad you are happy but you still could be working at a real job setting an example that your kids can be proud of instead of living off Jenelle,” another person wrote. “Jenelle could get a real job as well though. At some point your kids will ask how come neither of you have real jobs.”

During the ‘Teen Mom 2’ Season 11 reunion, viewers saw Briana DeJesus deny sleeping with Kail Lowry’s baby daddy Chris Lopez, despite being called out for sporting a shirt on the show that was formerly worn by Chris, after the two recorded a podcast episode together.

Briana told hosts Dr. Drew and Nessa that she has a collection of graphic tees, and the Goosebumps T-shirt in question just happened to be one that she and Chris both own. However, Chris later claimed to have given his shirt to Briana, only adding to the confusion.

Fortunately, Bar Smith’s mom, Shen Williams, decided to clear things up for everyone giving her take on The Great Goosebumps Shirt Caper.

In a video reposted to @teenmomshaderoom_ on Instagram, Shen shared with fans what she believes to be the truth behind T-shirt gate, while throwing enough shade at Briana to earn her a permanent spot on the DeJesus s**t list. (Right behind Kail and Luis Hernandez.)

“So, Briana was on the stage and she said that she didn’t sleep with Chris, they [just] had the same shirt,” Shen said in the clip. “But Chris said he gave her his shirt, so they didn’t have the same story. So you want my opinion on it? YES, THEY F**KED!”

Shen went on to question Chris’ taste in women, comparing a bedroom romp with Briana to playing a game of Russian roulette.

Shen made it clear in the comments that she finds the whole situation very amusing, even admitting that she is embarrassed for Briana for getting caught in an alleged lie. 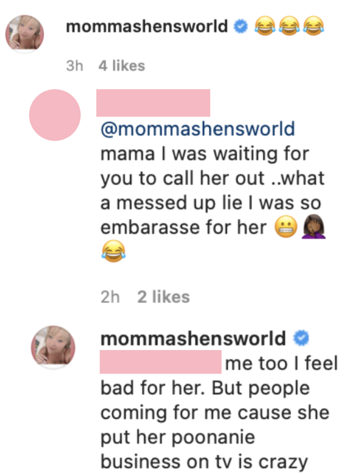 “ … I feel bad for her,” she replied to one of the comments. “But people coming for me cause she put her poonanie business on TV is crazy.”

(Even crazier? Typing the phrase “poonanie business” in a story without blinking an eye, because… ‘Teen Mom.’)

Catelynn has worked hard (by posting insanely inappropriate and misleading stories to social media) to earn her nickname of “Clickbait Cate” and, while some of her previous posts have caused controversy (who could forget this gem?), one of her latest posts about the recent Robb Elementary School shooting has been called “downright disgusting” by some of her followers.

Cate recently launched her online magazine/blog/thing, Cate Magazine, and the ‘Teen Mom OG’ star decided to promote it via a “#LinkInBio” post on Instagram. The Instagram post (which was removed after fans pummeled its comment section with remarks about how jaw-droppingly insensitive and inappropriate it was) promoted an “exclusive” story on May 25 (one day after the shooting). It included Catelynn’s quotes about the shooting, which killed 19 kids and two teachers.

However, whoever created the imagery for the story has obviously taken too many bacon slaps to the head, as they chose to photoshop an image showing a smiling Catelynn at an MTV awards show into a photo of the elementary school’s front yard with its sign.

“Dear Children of America, It’s not supposed to be this way,” the headline read.

While the Instagram post was eventually yanked down, the post on CateMagazine.com remains, with the photo of Catelynn and her grinning mug in front of the Robb Elementary School yard. The following story gives Catelynn’s thoughts on the incident, as well as on her desire for gun reform.

However, her statement was completely overshadowed by the inappropriate photo and #LinkInBio ridiculousness. Fans bashed Catelynn in the post’s comment section (until it was taken down).

“How could she direct readers to an article that makes her money with every click, thereby earning cash off the mass shooting?!” one person asked.

“I was never the hugest fan of Cate’s but I could tolerate her for the most part though I agree with you this is downright disgusting,” someone else commented.

“Can’t stop crying link in bio….. Jesus. And that smile, how can you be so tone-deaf?” another person wrote.

As The Ashley has explained in the past, Catelynn and the other ‘Teen Mom’ stars who take part in clickbait provide the clickbait company with access to their social media accounts. However, Catelynn has the ability to nix a post, or even choose which shows/cast members to post about.

Chris Lopez admits to nearly signing away his parental rights & almost checking himself into a “mental home.” after son Lux’s birth.

During an episode of the WeJustTalk’n podcast, ‘Teen Mom 2’ dad Chris Lopez, who shares two children with Kail Lowry (and a third with another woman), admitted he wasn’t quite ready for fatherhood when his oldest son Lux, 4, was born.

“I ain’t gonna lie, when I first started up, I didn’t really want it because I wasn’t ready for it,” he said.

He went on to admit later in the podcast that he considered legally signing away his rights to Lux, but claims he changed his mind after a judge talked to him privately.

(As The Ashley told you in January 2020, Chris attempted to give up his parenting rights to Lux in court during the fall of 2019 but a judge refused to sign off on his request; this is the first time Chris has confirmed this story.)

He then discussed the couple’s often child support/custody situation.

Chris claims he only learned of the mounting child support after Kail “put it out in court in a custody hearing.”

Chris went on to blame being “a bad dad at a point” on his relationship with Kail, which he said he allowed to impact his parenting.

“When you’re in a bad place it really affects everything,” he added. “I was not the best me.”

The father of three even revealed that stress and depression almost led him to seek professional help after Lux’s birth.

“I was so stressed out I almost checked myself into a home, mental home, just to get some peace,” he said. “That’s how bad [it was]. I just wanted peace, for like five minutes.”