The latest development in the ongoing custody battle between Jeff Lewis and his ex-partner Gage Edward has Jeff playing the DNA card in an effort to get the upper hand.

According to People, the former Flipping Out star once again sounded off about the custody battle for he and Gage’s three-year-old daughter Monroe on Thursday’s episode of his SiriusXM radio show, Jeff Lewis Live.

“She’s biologically my child,” Jeff said on the subject of custody. “I just think that complicates things.”

Jeff’s comments were made in regard to the lawsuit he was served by Gage last month, requesting various things, including legal support and 50/50 shared custody.

Despite Jeff reportedly being Monroe’s biological father, because both he and Gage are both on their daughter’s birth certificate, they have equal parental rights—- regardless of biology—- according to California State Law.

“[My lawyer and I] know what Gage’s end game is, which is money,” he said. “The reason, in my opinion, he wants 50 percent custody is because he wants maximum child support.”

Jeff went on to accuse Gage of being dishonest with him, claiming that Gage told him for the last year that he didn’t want child support.

Still, Jeff said he would be open to sitting down with Gage for mediation, though the pair’s efforts to do so have been unsuccessful in the past.

“I’ll be far more generous if we could just sit down and work it out,” he said. “I will be far, far, far more generous than I ever would when people are pushing me, and backing me into a corner, and threatening me, and expecting this entitlement this bulls**t. This can all be solved.

“ … But when I’ve got these f**king bastard attorneys threatening me all the time and demanding money, the last thing I want to do is give in,” he continued.

Jeff told his listeners he only wanted stability for Monroe and had her “best interest” at heart, though he did admit that Gage was a good father.

“My child is with me 70 percent of the time,” he said. “She’s happy. She’s well-adjusted. I’m very careful. I never say anything negative about him [in front of Monroe]. I actually think he’s a good dad. A really good dad! But I don’t think he can handle any more than what he’s got going on.

“Look, I spent 10 years with him, so there’s a part of me that still loves him which is why I’ll take care of him if he’ll stop being such a prick and start putting Monroe first,” he added. 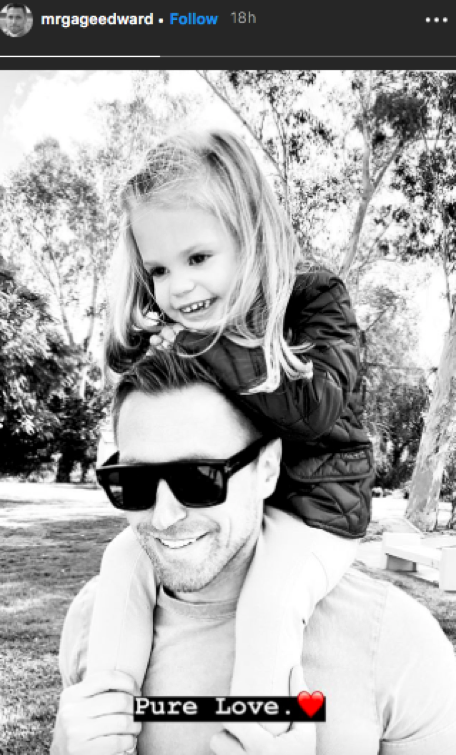 Jeff and Gage have lived apart since January 2019 and the former couple officially split the following month. The two came to a temporary custody agreement for Monroe in August, though by October, the truce was called off. A permanent custody agreement has yet to be worked out.