Ronnie Ortiz-Magro’s baby mama Jen Harley is reportedly blaming Jersey Shore for the downfall of her relationship and for ruining her family, according to a new interview she did with In Touch Weekly. Jen told the magazine she “hates” the show and wishes “it was never part of our lives.”

“It completely ruined our family, ruined the person I was in love with,” she stated.

Jen said at first she was “excited” about seeing her then-boyfriend on the show’s spin-off, Jersey Shore Family Vacation, but she quickly changed her mind after tuning in.

“So I started watching it and then I just realized everything they were doing and how Ronnie was acting on the show and it was just really sh**ty so I didn’t watch it anymore,” she said.

Jen went on to say that she actually did like Ronnie’s cast mates (even though she previously called Nicole “Snooki” Polizzi out for allegedly bullying her), and said that they were all “really nice” to her — or at least to her face.

“But I mean, we weren’t ever really friends,” she added. “But I don’t think we have any bad tension or anything.”

Jen said Ronnie’s fans often come to his defense online, preventing her from being able to defend herself “unless it’s on social media” — something her and Ronnie partake in quite often. Just this week, Jen took to Instagram Stories to share her thoughts about narcissists. While she refrained from calling Ronnie out by name, the post mentioned those who “have no problem abandoning families and loved ones” and those who inflict “emotional manipulation and abuse.” 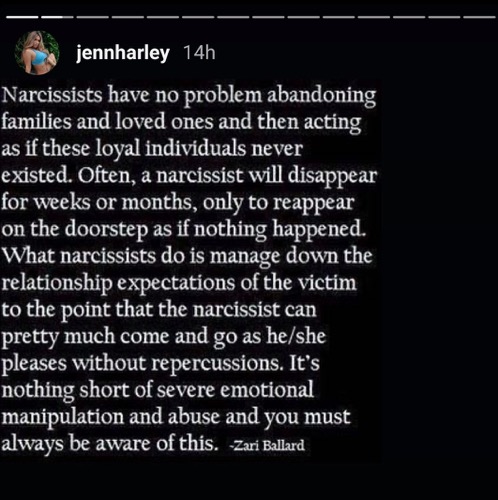 “We have no contact. We’re not even allowed to talk to each other,” Jen said, adding that the protection order that’s currently in place bars the former lovebirds from even texting or Face-Timing. Due to the current global pandemic, Jen says this order will remain in place for the foreseeable future.

“We have to wait for our next court date to even modify [the protection order],” she said. “It’s been put off.”

Ariana’s second birthday was last week, and Ronnie recognized it with an Instagram post, telling his daughter, “No matter where U are, who keeps U from me, I will always be here for U! It’ll are my world, you are my reason! I wake up everyday thanking God for U! Even though I can’t be with you, I will always be here. I love you so much! And will never stop fighting for U!”

IT WAS APRIL 1ST, I FELT U IN HER STOMACH.. KICK AND KICK AND KICK! I HAD TO FLY TO LONDON FOR WORK… I FLEW TO NEWARK TO MEET THE CAST MEMBERS.. I HAD A FEELING I SHOULDN’T HAVE WENT, I FELT I SHOULD’VE STAYED.. SO I FLY TO MEET UR UNCLES & AUNTS.. THEY GIVE US A 4 HOUR FLIGHT DELAY ON THE GROUND.. I WANTED TO FLY HOME.. THEY BOARDED OUR PLANE LAST MINUTE.. WE SAT ON THE RUN WAY FOR 2 HOURS… I FELL ASLEEP AND WOKE UP AS WE TOOK OFF.. I SAT ON THE PLANE AFRAID AND WORRIED.. I GET A FT! THAT SAYS I’M HAVING THE BABY! WE ARE 3 HOURS FROM LONDON.. I PANICKED AND WE FIGURED IT OUT.. I LANDED AND GOT THRU CUSTOMS.. I HAD TO RE CHECK MY BAG AND GET BACK THRU CUSTOMS.. I BOARD THE PLANE!! I GET A TEXT SAYING THE BABY IS ALMOST THERE! I HAVE A 8 HOURS FLIGHT! IN THE AIR I AM WORRYING SO MUCH, I DIDN’T WANT U TO BE BORN WITHOUT ME THERE, I DIDN’T WANT UR FIRST SIGHT TO BE NOBODY.. I FINALLY LAND WITHOUT WIFI AND NO CONTACT! I GET THRU CUSTOMS AND RACE TO MY CAB! I SAID I NEVER THOUGHT I WOULD SAY THIS BUT I AM HAVING A KID AND U NEED TO HURRY UP! I LAND IN TIME TO HE THERE FOR YOUR BIRTH.. IT WAS CHAOS BUT I HELD YOU FIRST, I LOOKED INTO YOUR EYES FIRST, THE DOCTOR TOLD ME THEY NEVER SAW FATHER COVER A BABY EYES LIKE I DID… THAT MEANS NO MATTER WHERE U ARE, WHO KEEPS U FROM ME, I WILL ALWAYS BE HERE FOR U! IT’LL ARE MY WORLD , YOU ARE MY REASON! I WAKE UP EVERYDAY THANKING GOD FOR U! EVEN THOUGH I CAN’T BE WITH YOU, I WILL ALWAYS BE HERE. I LOVE YOU SO MUCH! AND WILL NEVER STOP FIGHTING FOR U! #DADDYSLITTLEGIRL #HappyBirthdaybabyGirl #DaddyLovesYou

Whether or not the show is to blame for the demise of Ronnie and Jen’s relationship/family, the couple has been embroiled in constant drama for more than two years.

During a pretrial conference in February, Ronnie was ordered by a judge to stop contacting Jen following an altercation between the couple that happened in October 2019 — an incident for which Ronnie is facing several misdemeanor charges. Despite that order, in January, Jen allegedly attacked Ronnie in his home, resulting in Ronnie filing a restraining order against her.

In December 2019, Jen called Ronnie out on social media for allegedly abusing her.

Ronnie has not yet responded publicly to Jen’s latest interview but…stay tuned….