Derick Dillard is proudly proclaiming himself to be a “reformed Counting On cast member,” and he’s not shy about expressing his hope that his wife Jill‘s adult siblings will follow suit and leave the show as well!

In a series of comments left on a ‘Counting On’-themed post on the official TLC Instagram page, Derick did not hold back while discussing the show, his wife’s father Jim Bob Duggar, and the abuse, humiliation and threats he says he and Jill suffered when they told Jill’s family they no longer wanted to appear on the Duggar Family reality show.

Derick first took aim at how fake he says ‘Counting On’ is, leaving a comment under a post promoting the new season, which premiered this week. 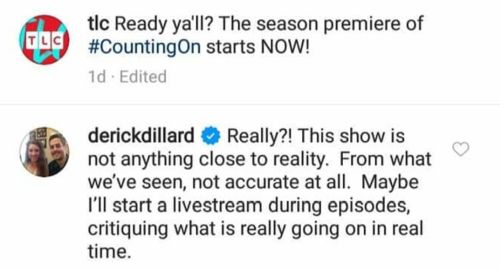 “Really!?” Derick wrote using his verified Instagram account. “This show is not anything close to reality. From what we’ve seen, not accurate at all.”

He then threatened to spill the tea as the episodes air.

“Maybe I’ll start a livestream during episodes critiquing what is really going on in real time.”

When loyal fans of the show scolded Derick for being a “hater,” he replied that he had a personal reason to hate ‘Counting On’ and what it stands for.

“It has messed with my family,” he wrote. “People should address their issues instead of sweeping them under the rug.”

Next, Derick agreed with other fans’ comments regarding the increasing prominence of Jim Bob and his wife Michelle on ‘Counting On.’ As longtime fans of the show know, the Duggars’ original show, 19 Kids & Counting, was cancelled in 2015 after Josh Duggar‘s sex abuse scandal came to light. Later, ‘Counting On’ was introduced (originally titled Jill & Jessa: Counting On), and was  centered around the grown Duggar kids.

Michelle and Jim Bob were very rarely seen during the early seasons of the show, but have gradually become more central to ‘Counting On’ plotlines.

“I don’t understand why [“19 Kids & Counting”] was cancelled,” Derick wrote, insinuating that ‘Counting On’ has basically become what the original show was.

Derick then began to speak of the humiliation and threats he says he and Jill suffered when they tried to stop filming for ‘Counting On.’

“That’s because [the show] is still under [Jim Bob’s] control, and he will attack the victims if they threaten his show,” Derick wrote. “We were humiliated and threatened when we first tried to not film. Now it’s not dependent on us anymore to keep the show going because more kids got married, so it’s more OK if we quit.” 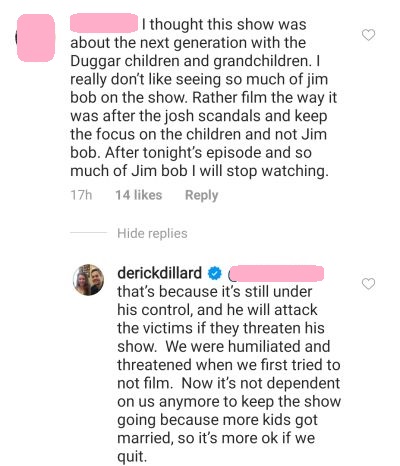 Once fans began to notice Derick’s comments, they began to ask him questions directly, many of which were in regard to his known feud with Jim Bob. (Derick and Jill are currently not allowed at the Duggar Family home without permission from Jim Bob, due to Jim Bob thinking they will be a bad influence on his other children.)

Speaking of the other “children” (many of whom are over the age of 18 now), Derick stated that he is hopeful that Jill’s adult siblings and their families will follow his and Jill’s lead and leave the show. 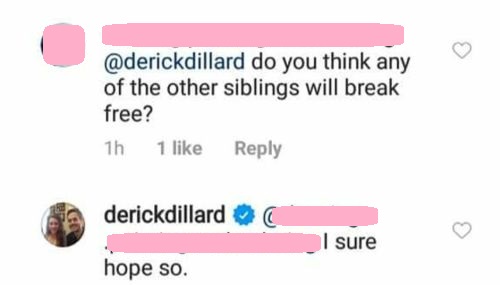 “I sure hope so,” Derick replied when asked if he thinks any of Jill’s brothers and sisters will “break free” of the show and Jim Bob’s control.

In other replies to fans’ questions, Derick confirmed that he doesn’t have an issue with Jill’s entire family, “just the boss.” (The “boss” is obviously Jim Bob.)

When some fans suggested that Derick was just salty because he is no longer welcome on the show, Derick disagreed and tried to set the timeline of events straight. (As fans will remember, back in 2017 Derick posted a series of derogatory tweets about transgender TLC star Jazz Jennings, prompting TLC to issue a statement in November 2017 informing viewers that Derick had not “participated in ‘Counting On’ for months” and that TLC had “no plans to feature him in the future.”)

On Wednesday, Derick wrote that he and Jill had actually left the show way before any of that went down, and that it was “100 percent not true” that he was fired from ‘Counting On’ over the Jazz comments. 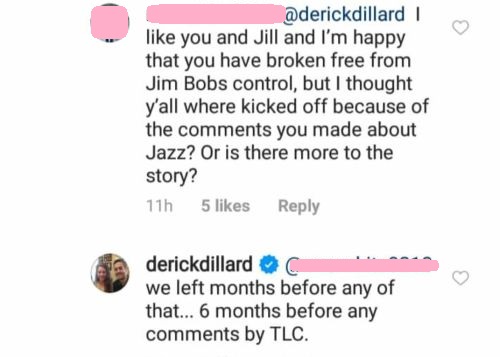 (Although Derick didn’t get into specifics in regard to “what we knew” means, it can be assumed he’s talking about the lack of payment he and Jill— as well as her other Duggar siblings who appear on ‘Counting On’— have allegedly dealt with. In past rants, Derick has stated that Jim Bob is the only Duggar paid for the show, and that the rest of the family “volunteers.”)

Derick later told another nay-sayer that he and Jill are in therapy to help them work through the “abuse” they’ve experienced from their dealings with Jill’s family.

While Jill’s cousin Amy Duggar recently spoke out about how proud of Jill she is for finding her own path, away from her family, Jill has said very little about the feud between her husband and her father.