Teen Mom 2 keeps losing viewers— but now its losing its long-time producers, too!

The Ashley can exclusively report that the network higher-ups have fired some of the most-recognizable producers from ‘Teen Mom 2,’ due to how low the show’s ratings have sunk. The Ashley’s production sources tell her that the shake-up has caused several producers to be axed, due to the fact that MTV feels they’re not doing their jobs– which is to get authentic stories from the girls on the show!

“The production company recently got in a lot of trouble because the ratings of the show are so bad,” one production source tells The Ashley.

The ratings for the episode that aired on Tuesday, July 1 were positively dismal compared to the numbers the show used to bring in. That episode barely cracked 400,000 viewers. The numbers for ‘Teen Mom 2’ Season 10B— which is the first without Chelsea Houska, have been low since the season premiere.

Last month, The Ashley gathered up the ratings from 10B so far and things are “not well” in ‘Teen Mom’ Ratings Land. The episodes that aired in May and June were the lowest-rated in the series’ history.

The June 1 episode brought in a sad 500,000 viewers. (Again, this is a show that, even two years ago, was bringing in an average of 900,000 viewers an episode.) The other most-recent episodes barely creeped above the 500k mark, with the episode that aired on May 25 (which, as you may remember, featured riveting storylines, such as Kail’s son helping her pick out kitchen tile), coming in at just 520,000 viewers.

The network is putting the blame for the poor ratings on the production company, The Ashley’s sources tell her.

“The network feels that the producers have allowed the girls to call the shots on what they want to film and what they don’t, and the result is an incredibly boring and inauthentic show. Fans watch all the drama go down on social media, but most of the real stuff never makes it on the show.”

As The Ashley previously reported, ‘Teen Mom 2’ was renewed for another season, despite how bad its ratings currently are. However, the network higher-ups are demanding changes be made.

“There may be more producers cut if things don’t improve,” the source added.

Last month, Briana DeJesus accused Kail Lowry of refusing to film the juicy stuff happening in her life and instead, filming about redoing her house.

“Like Kail is sitting on the show legitimately filming about a wallpaper color choice when she could be filming about a domestic abuse situation with Chris that I was told she was trying to hide,” Briana told Celebuzz in June.

On Thursday, news broke that Kail has filed a lawsuit against Briana for the statements she made in that interview and during an Instagram Live session shortly after.

One of the most-recognizable producers that The Ashley hears was let go was Kristen Schylinski. ‘Teen Mom 2’ fans know her as the former producer of Jenelle Evans. After Jenelle was fired from the show in 2019, though, Kristen stayed on as a producer who overlooked all of the girls’ story in the field.

The Ashley can confirm that the show’s other recognizable producer, Larry Musnik, is still with the show, however. The Ashley can’t 100 percent confirm the other producer(s) who were axed, but she will update this story when more info is available.

UPDATE! After The Ashley’s story was posted, Briana tweeted— and then deleted— a comment, along with a link to the article. She implied that the producer of her nemesis, Kail, was also axed. 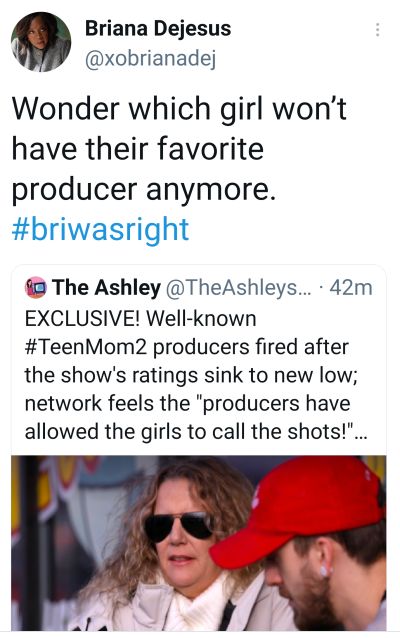 “Wonder which girl won’t have their favorite producer anymore. #BriWasRight,” she wrote.

RELATED STORY: ‘Teen Mom 2’ Season 10B Ratings Continue to Sink, Despite Addition of Ashley Jones: A Look at the Latest Numbers