From getting engaged to getting angry, the stars of the ‘Teen Mom’ franchise (both past and present) have been keeping themselves busy lately! In an effort to get you up-to-date on the latest Teen Mom OG and Teen Mom 2 news, The Ashley brings you the Teen Mom News Pile.

Break out the crepe paper and get those tissue paper bells out (again) because Leah’s sister is planning to take yet another trip down the aisle!

Victoria is once again engaged. She made the engagement “Facebook Official,” confirming that she is planning to marry her (third) baby daddy, Royer Rodriguez. This will be the ‘Teen Mom 2’ sibling’s third wedding, as she was previously married to Brian Jones and Domenick Crapello.

As ‘Teen Mom 2’ fans know, Victoria met Royer while she, Leah, Kail Lowry and others were on vacation in Costa Rica. Royer was hired to be their rafting guide… and things got, um, wet ‘n’ wild between him and Victoria afterward, with her ending up knocked up at the end of the vacation. She gave birth to their son, Cai in 2020.

Victoria, Leah and their mom Dawn Spears have been in Costa Rica for the last week or so, visiting Royer. This marks the first time that Royer has been able to meet his son. 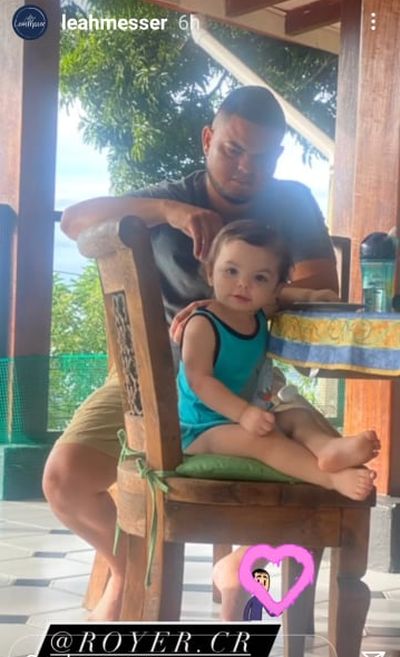 It’s unknown if the proposal happened during this trip, or previously.

Victoria’s marital history reads much like Leah’s. As you may remember, Victoria got married in April 2015 at the age of 20 to Brian Jones. (Leah served as a bridesmaid, even though she was in the midst of her divorce from Jeremy Calvert.)

In November 2016, Victoria and Brian welcomed a daughter, Cami, and Brian was seen on several seasons of ‘Teen Mom 2.’ In the spring of 2017, Victoria and Brian split, and by September she was already dating Domenick. In February 2018, she announced that they were married and she and Domenick were expecting a baby together. She welcomed their daughter Cerenity soon after.

Victoria was still legally married to Domenick when she went on the fateful Costa Rica trip in May 2019. Later that month, she filed for divorce from Domenick.

Kieffer Delp is Basically Homeless & Not Interested in Your Prayers

Jenelle’s former soulmate has found himself sans a roof over his head, a year-and-a-half after being released from prison. (As The Ashley previously reported, Kieffer had an 18-month prison stay for operating a meth lab in the kitchen of his apartment, as you do.)

Kieffer recently tweeted that, although he has nowhere to live, he won’t be asking anyone for favors.

“I don’t got no where to go rite now because of covid but ill bet yu other then a select couple friends who do what they can I ain’t ask nobody for s**t and I ain’t gonna,” he tweeted on Monday.

When someone offered him prayers (instead of a dirty green hoodie to rest his head on), and told The Kieff that “God got you,” Kieffer said he wasn’t interested in God’s help, because God hasn’t helped him out in the past.

“God def does not got me if I depended on God to help me I would be down forever,” Kieffer replied, adding that if he’s going to worship anyone it will be the fictional character Thor.

“S**t, Thor got me if [I] were hoping from false deities he’s way cooler,” Kieff replied.

Back in April, Kieffer made headlines after he defended Jenelle’s questionable TikTok dancing, telling nay-sayers to stop hating on his former soulmate.

“Stop hatin’ on mah bitch fr she up there doin her thug thizzle,” Kieffer insisted.

The Ashley will leave you with these words of wisdom, posted on Twitter by Kieffer on August 10.

“If Yu make a man hungry he take greater risks I will break into ya crib just to raid ya fridge if I bear hug a bear I could break his ribs.”

Ryan Edwards Loves the American Flag But Says MTV Does Not.

Ryan has been quite chit-chatty with the tabloids this week, but in the latest portion of his interview with The Sun to be released, the former ‘Teen Mom OG’ dad revealed that he got into a fight with the show’s producers the last time they came to film because he felt that they disrespected his American flag.

Ryan— who, along with his wife and parents, was fired from the MTV earlier this year— claims that he became enraged when the producers removed an American flag off his porch because it was getting “in their way” while filming.

“What got me is when they took my flag down off the porch,” Ryan told the website. “They laid it on the ground and when I went down to pick it up they told me it was in their shot.”

Ryan— ever the American patriot— said he demanded they replace the flag.

“I got real angry because it was an American flag and they said it was in their way,” he said. “I said ‘Either put it back on the post or leave’ and that was the last time they ever came back, I guess.”

Ryan then made a rather confusing statement.

“MTV just stands for a lot of things that my wife and I don’t support, politics and respecting people’s rights, that kind of stuff,” he said.

Anyway, Ryan has stated that he and his family were considering leaving ‘Teen Mom OG’ before Maci went to the network higher-ups and demanded the Edwards Clan get the boot.

“I just don’t agree with [MTV]  on a lot of stuff and I didn’t want to work for some place that was like that anymore, they were just way too far out there for me,” Ryan said. “Mackenzie and I were discussing, ‘Do we really want to do this anymore?’ and then I guess they made the decision for us, which was a good decision.

“And then Maci didn’t want us on the show anymore either.”

Ryan told The Sun that life without MTV cameras is great.

“We’ve been doing good since leaving the show, just kinda hanging out,” he said. “Everybody’s happy and enjoying not dealing with MTV. I’m not resentful, MTV is all about making money and s**t, and that’s alright.”

Catelynn Lowell tells the thirsty girls to get away from her man.

Catelynn’s husband, Tyler Baltierra, has been showing off his chiseled physique on The ‘Gram lately, spurring a flurry of gals who are lusting after Ty’s trouser snake. The ‘Teen Mom OG’ mom— who is currently pregnant with the couple’s third child— recently took to the comment section of Tyler’s latest shirtless Instagram photo to tell the girls who are commenting on her husband’s pic to back off.

“All these thirsty girls on here,” she wrote. “STAY wishing because this is what I sleep next to every night and forever! #gtfoh.” 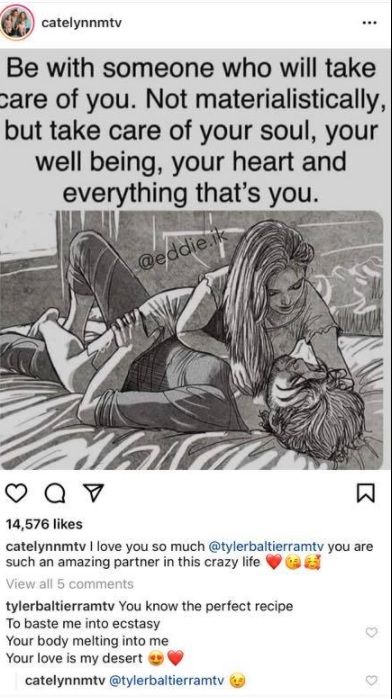 Tyler graced us all with some of his signature poetry, in which he talked about how he appreciates how Cate can “baste me into ecstasy.”

He also declared that Catelynn’s love is his “desert.”