Season 2 of Teen Mom Family Reunion premiered this week, and while the much anticipated brawl between Ashley Jones and Briana DeJesus (and their mothers) has yet to happen, some fans online have already begun commenting on the division among the cast.

As moms from the Teen Mom franchise began arriving to this season’s venue during Tuesday’s episode, Ashley and her mom, Tea, were the last to make their entrance. Right away, it was clear that Briana wasn’t excited to see Ashley, nor was Jade Cline.

(Viewers may recall Jade and Ashley nearly coming to blows during the first episode of ‘Teen Mom Family Reunion’ Season 1, with Briana also getting up in the mix.)

Later in Tuesday’s episode, Ashley and her mom decided to sit in a van while some of the cast took part in a bungee jumping activity. Ashley said she was going back to the van because she wasn’t feel well, though Briana–- who was getting ready to bungee jump at this point–- commented that she wasn’t concerned about Ashley retreating to the van, as she was trying not to pay attention to Ashley and Tea anyway. Meanwhile, Cheyenne Floyd wondered if Ashley was sitting out just to avoid the group activity.

Ashley and Tea appeared to have stayed in the van for the remainder of the activity, leading some online to call out the other moms for not going to make sure their cast mate was okay.

“Why didn’t someone go check on Ashley instead of assuming, since they was so concerned,” one person commented.

“And none of these heauxs went and checked on Ashley or asked if she was okay. Smh,” another wrote.

Tuesday’s premiere ended with Kayla Sessler and Kiaya Elliott of Teen Mom: Young and Pregnant making a surprise entrance to the ‘Teen Mom Family Reunion’ house. Shortly after her arrival, Kiaya admitted she was “not that fond of Ashley” given their past social media feud–- something she also touched on this week on Instagram Live.

(Back in 2020, Kiaya and Ashley got into an Instagram squabble over their respective online boutiques…as you do. Unsurprisingly, Tea inserted herself into the girls’ drama and Kiaya’s mom, Tiffany, also got involved to defend Kiaya.)

Following Tuesday’s episode, some viewers took to social media expressing their dislike over the cast–- Kiaya, in this instance–- bringing up past drama.

“They trynna find reasons to make Ashley the villain,” one person wrote, to which another responded, “Exactly and I don’t like it either like it’s a new year let it go they always bring it up whenever they see her.”

“If a bitch don’t say it to my face… the s**t don’t count!” a comment shared by @teenmomshaderoom__ read.

“Smh everybody got a beef over Instagram comments… grow tf up!!” another person wrote. “This is some stupid, petty, childish s**t. She said what she said… move tf on and enjoy the trip.”

After the premiere, Jade told fans during an Instagram Q&A that things between her and Ashley remain on bad terms, and while she’s “close with almost everyone” in the cast, she and Ashley haven’t been friends since she made the jump from ’Young and Pregnant’ to Teen Mom 2.

She also brought up the feud between her and Ashley that began years ago.

“I think y’all forget she literally harassed me and tried to trash me online for 4+ years during Y&P, TM2 and the next chapter. And I did nothing to the girl,” Jade wrote. “ …Someone can only take so much. She literally tried to bully me off the show for years. Over nothing. All this info is still online.

“During the current season I wanted nothing to do with her,” she continued. “The narcissistic behavior was vile and I won’t have that in my life anymore. I’ve grown and moved on. I forgive her bc forgiveness is for me and I think she has a lot she needs to work on in life. I hope she gets to a place of peace so she can stop spreading hate and so much anger.”

As for Ashley, she said earlier this week that she doesn’t plan to address what happened this season on ‘Teen Mom Family Reunion.’ 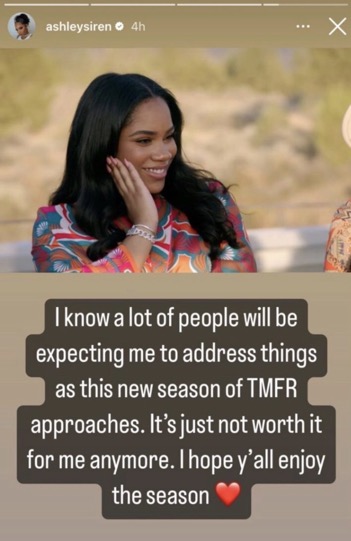 “It’s just not worth it for me anymore,” she added. “I hope y’all enjoy the season.”

RELATED STORY: Briana DeJesus Explains Why She Didn’t Want to Film ’Teen Mom: The Next Chapter’ Reunion With Ashley Jones: “I Just Couldn’t Do That Again”