The Duggar family tree just got a little bigger!

I'M IN LOVE WITH 2 MEN!!! Welcome to our little world Daxton Ryan!!! I'm in awe of you!!! ♡♡♡♡♡ Thank you @people and @lorenbullardphotography @posynwa Link in bio

The couple’s photographer Loren Bullard told the magazine that Amy had a “smooth and easy delivery.”

“Both mom and baby are great and healthy,” she added.

The Kings, who appeared on a season of Marriage Boot Camp: Reality Stars, announced in April that they were expecting after nearly four years of marriage (a rarity by Duggar standards). In June, they revealed they were having a baby boy. At the time, Amy said she “always wanted to be a boy mom” and that she and Dillon had already picked out a name.

We just wanted to say thank you for all the sweet comments & messages!! We cannot wait to meet this little ball of energy!! #babyking #happyfeet I was so excited I could hardly sit still!!😂

Amy’s announcement of Daxton’s arrival on social media brought in many well wishes in the comment section, with Jill Duggar and Anna Duggar among the first to send their congratulations to the now family of three. 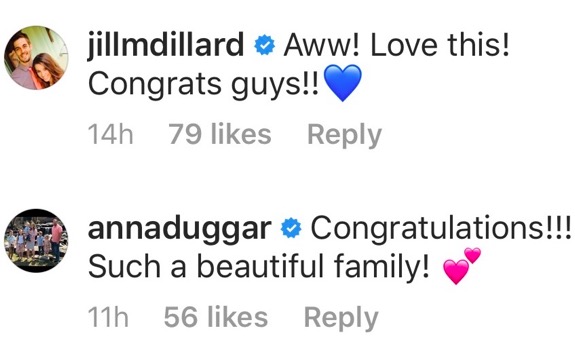 Unlike her fruitful family who commonly multiply like it’s their job, Amy told Us Weekly in 2015 that she and Dillon plan to have a small brood.

Aside from Amy and Dillon’s new addition, the Duggar family is expected to grow even more in the near future as John-David and his wife Abbie are currently expecting their first child, as are Josiah and Lauren. Joe and Kendra are also expecting (baby number 2), as well as Josh and Anna (baby number 6).

RELATED STORY: Duggars Put Home Where Grandma Mary Duggar Died Up for Sale, After Revealing Her Death Will Be Covered on New Season of ‘Counting On’