From trying to defend your 10-year-old’s twerking on TikTok to blaming your frequent visits from CPS on MTV, the stars (past and present) of the Teen Mom franchise have had quite the busy week.

Well, less than two weeks into 2020 and former ‘Teen Mom OG’ star Farrah Abraham has already given us a solid example of her stellar parenting.

After a TikTok video of Farrah’s 10-year-old daughter Sophia twerking was posted to Farrah’s own account earlier this month and met with criticism, Farrah attempted to defend the incident… we think?

Farrah told The Sun at ThinkBIG 2020 Conference that when she told Sophia she didn’t think the content of the video was age appropriate due to Sophia “twerking [her] booty,” Sophia informed her mom that “all the kids are doing it.”

Farrah went on to say that she finds it sad that “thousands and millions of other kids can act like kids and Sophia doesn’t get that attribute of acting like a child.”

“I feel like I’m allowing my kid to be a child and that’s the first and foremost no. 1,” she continued.

“I don’t think it’s scandalous at all,” she said. “We’ve always done funny little things like that around the house.”

Whatever you say, Debz!

While Farrah is perfectly fine with people (including her own child) twerking online for millions to see, she’s very much against pursuing a relationship with someone who doesn’t have a green card…apparently.

According to The Sun, Farrah doesn’t speak to her former co-star Amber Portwood, but she’s still gotten word that Amber is “dating wrong” — referring to Amber’s new relationship with Dimitri Garcia of Belgium.

“People are not making wise choices and that’s kind of scary for them,” she said. “I do date out of the country, I do these amazing things but I’m not having someone come from another country with no green card living with me, there’s a scary element to that.”

A source close to Amber told the site that she and Dimitri do not live together, despite Farrah’s concerns via Farrah Speak.

After her car was allegedly stolen, Teen Mom: Young and Pregnant star Rachel Beaver was accused online of associating with the wrong crowd and of needing to “get sober.” Rachel defended the company she keeps and also challenged the individual to “come prove I’m on drugs, I bet ya can’t.” She then revealed that Child Protective Services makes visits to her house often due to her being on the MTV show. 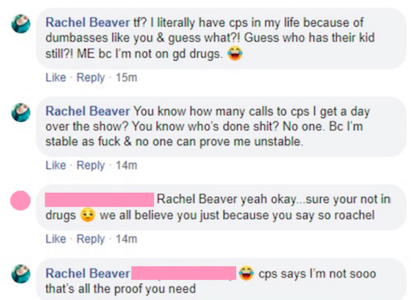 When the commenter went on to doubt Rachel’s sobriety, Rachel defended herself, saying “cps says I’m not [on drugs] sooo that’s all the proof you need.”

Teen Mom OG star Mackenzie McKee has revealed that the PayPal fundraiser she created to raise funds to benefit her parents Brad and Angie Douthit as her mother battled cancer met and ultimately exceeded its goal to pay off the couple’s home.

On Monday, Mackenzie posted a video filmed shortly before her mother’s death in which they shared with Angie the news that enough money had been donated by friends, family and followers to pay off she and Brad’s home. 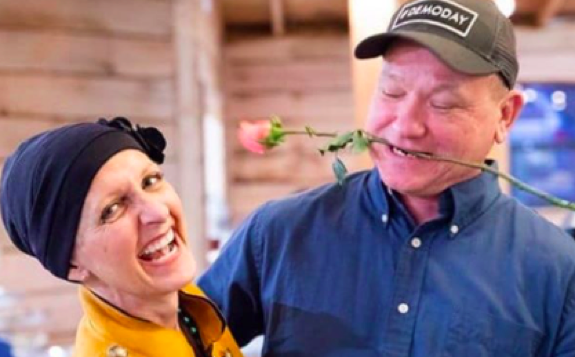 The video was shared to Angie’s Instagram page, which has been regularly updated by Angie’s friends and family since her passing. Along with the touching video, Mackenzie included a Bible verse to Angie’s followers and a message sharing with them the good news.

“ … I am sharing a video of the last days of her life where God blesses her abundantly just like he promises he would,” Mackenzie wrote. “Her house has hosted more church gatherings than I can count. It was the house where you didn’t knock, you walked in and her shoulder was there to cry on. No matter who you were, you were welcomed in her home. Her and my dad grew a family and made millions of special memories in that house.

2 Corinthians 9:7-8 “Each of you should give what you have decided in your heart to give, not reluctantly or under compulsion, for God loves a cheerful giver. And God is able to bless you abundantly, so that in all things at all times, having all that you need, you will abound in every good work.” When writing about Angie, I tend to always lean towards what a giver she was. I have so many stories of how she would give and give and give. She was a PERFECT example of being a cheerful giver. Anytime she would barely make bills, I would remember her saying, “because of my tithings, I have enough to own a beautiful mansion in heaven.” She didn’t care much about what she owned here on earth, she wanted to give to others because she knows her ending reward would be amazing and she was pleasing God. I am sharing a video of the last days of her life where God blesses her abundantly just like he promises he would. Her house has hosted more church gatherings than I can count. It was the house where you didn’t knock, you walked in and her shoulder was there to cry on. No matter who you were, you were welcomed in her home. Her and my dad grew a family and made millions of special memories in that house. All she was worried about when getting sick was leaving my dad with a house payment. Other than her medical bills, that was their only debt. I simply set up a PayPal and asked people to donate whatever it was they felt like donating. And I know it was because she touched so many lives and always gave the shirt off her back, that everyone came together and not only helped pay their house off, but take care of some medical bills. Thank you everyone who chose to be a cheerful giver. She left earth with those giving back and her reward was good. Are you stingy with the things you own or your money? Are you scared to tithe because you are on a tight income? God wants us to give and trust in Him that He will take care of us. #alwaysbekind #staystrongmightywarrior #ultimatehealing – Mackenzie Mckee, daughter of Angie Douthit @mackenziemckee

“All she was worried about when getting sick was leaving my dad with a house payment,” she continued. “Other than her medical bills, that was their only debt.”

Mackenzie went on to say that everyone coming together has not only helped the Douthits pay their house off, but also take care of some of the medical bills.

“Thank you everyone who chose to be a cheerful giver,” she added. “She left earth with those giving back and her reward was good.”