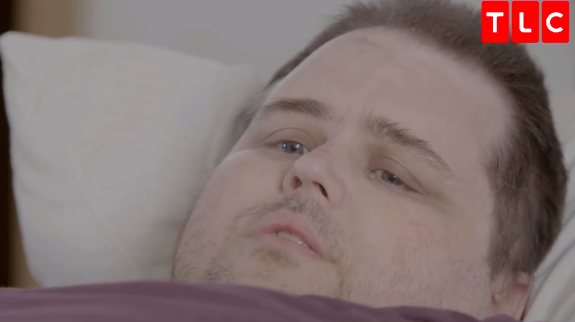 James King, who appeared on Season 5 of TLC’s My 600 Lb. Life, passed away on Friday.

According to his obituary, James died in Nashville at the age of 49. While his cause of death has not been revealed, James had dealt with various health issues in the past, including cirrhosis of the liver and sepsis.

James, who lived in Paducah, Kentucky, is survived by his wife, Lisa (who appeared on the show with him), their six children and 19 grandchildren. According to his obituary, James’ funeral arrangements will be private.

James’ episode was memorable because, at the time of filming, James was the heaviest person that had ever been featured on the show, weighing in initially at 791 lbs. During a “Where Are They Now?” episode the show’s medical adviser, Dr. Now, removed him from the weight loss program in Month 11 because he felt that James had failed to make enough progress to be able to have weight loss surgery.

“Hopefully he’ll work to get under 600 lbs, and I’ll continue him on this program,” Dr. Now said during the episode. “But, until then, James is done.”

At the end of one of his update episodes, James vowed to lose half of his body weight and get back into Dr. Now’s program but, unfortunately, that never happened. At one point, James weighed in at 843 lbs.

In a tweet posted on Monday, TLC– the network that airs ‘My 600 lb. Life’– confirmed James’ death and expressed its condolences to his family.

“TLC was deeply saddened by the loss of James King, who shared his weight-loss journey on My 600lb Life,” TLC tweeted. “Our thoughts and prayers are with his family at this difficult time.”

TLC was deeply saddened by the loss of James King, who shared his weight-loss journey on My 600lb Life. Our thoughts and prayers are with his family at this difficult time.

Tragically, James is the seventh ‘My 600 Lb. Life’ cast member to pass away, with Season 1’s Henry Foots being the show’s first loss in 2013. Rob Buchel of Season 6 passed away in 2017 from a heart attack and the following year, L.B. Bonner, also of Season 6, committed suicide. That same month, Lisa Fleming of Season 3 passed away from causes unrelated to her weight.

In February 2019, Sean Milliken, who appeared on Season 4, died after suffering complications from an infection at the age of 29. That month also saw the loss of Season 7’s Kelly Mason, who died of heart failure during her ‘My 600 Lb. Life’ episode.

James’s unfortunate passing comes as ‘My 600 Lb. Life’ production company Megalomedia faces multiple lawsuits from former stars, including one from L.B.’s family for the production company’s role in his 2018 death.

Megalomedia has denied the claims made in the lawsuits.