Each episode of Revenge Prank with DJ Pauly D and Vinny will pair one of the guidos with the subject of a viral internet prank who is seeking some revenge on the friend or loved one who originally embarrassed them. (Think Punk’d meets Revenge Body with Khloe Kardashian meets a whole lot of hair gel!)

With the help of the ‘Jersey Shore’ prank war champs, the pairs will attempt to pull off some over-the-top pranks and finally get their ultimate revenge.

Pauly shared his excitement about the upcoming show on Instagram, posting a link to MTV’s release along with a behind-the-scenes photo. 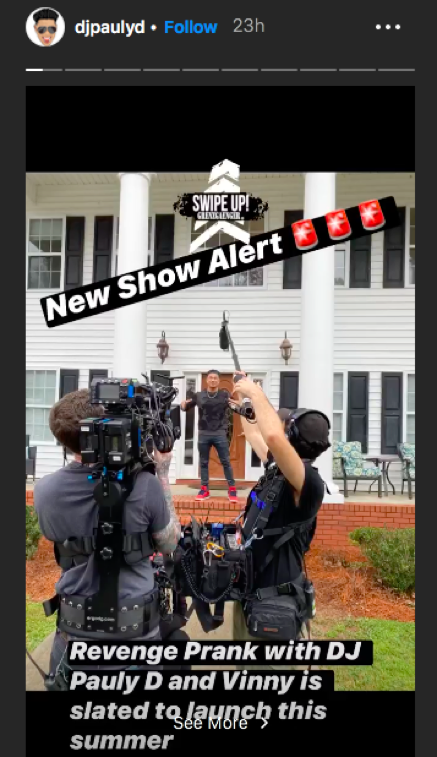 Of course, this isn’t the first time Pauly and Vinny have teamed up for an MTV project outside of ‘Jersey Shore’ and Jersey Shore: Family Vacation. Last year, the two appeared on A Double Shot at Love with DJ Pauly D & Vinny in which they looked for their respective “swolemates” among 20 single women.

In October 2019, Pauly and Vinny teamed up once again to film  DJ Pauly D and Vinny’s Vegas Pool Party. The docu-series, which is currently in pre-production, was described as a follow-up to the dating show in which Pauly and Vinny take on a work-life balance in Las Vegas while also helping their friends get a shot at Vegas life.

A premiere date for ‘Revenge Prank with DJ Pauly D and Vinny’ has yet to be announced, but according to Deadline, it will premiere this summer. but in the meantime, fans can keep watching the pair every Thursday on ‘Jersey Shore: Family Vacation’.