The breakup between Tamar Braxton and David Adefeso recently took a turn when Tamar’s sister and Braxton Family Values co-star Toni Braxton stepped in, slamming David on Twitter and demanding he stay away from the entire Braxton crew.

Toni took to Twitter on Monday to call David a “weasel” and a “ferret” who was “beyond contempt.” She also told him not include her children in his “shenanigans” and demanded he “leave [her] family ALONE!” 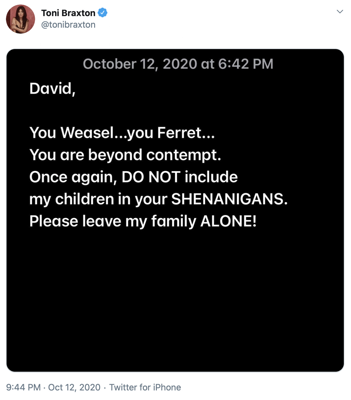 According to The Shade Room, David was caught off guard by Toni’s message, though his rep told the site Toni’s anger was actually due to police showing up at her home to question and serve Tamar regarding an ongoing domestic violence investigation involving David.

In alleged texts obtained by TSR, Toni told David she didn’t want to be involved in David and Tamar’s personal business.

“However; it saddens me that two people who have loved each other for as long as u two had have now decided to take it to this extreme,” Toni allegedly wrote in another text.

Tamar and David’s relationship began to unravel, quite tumultuously, just months after Tamar was hospitalized in July after a suicide attempt – an incident in which David reportedly found the singer and reality TV star unresponsive. In September, David filed for an order of protection against Tamar, claiming she attacked him while they were driving.

Tamar denied David’s claims, stating it was actually him that attacked her; she also claimed that David talked about the two of them dying in a murder/suicide situation. More recently, David claimed Tamar threatened to “send goons” to kill him and that she trashed his car.

Shortly after Toni called David out on social media, Tamar tweeted a line from JAY-Z’s “Family Feud,” seemingly directed at her sister.

“Nobody wins when the family feuds,” she wrote, along with a broken heart emoji.

Tamar also posted and deleted an explanation after being accused of defending David.

“No, I’m not defending anyone,” she wrote. “But when things start to get out of hand, no one wins. And it’s out of hand. It really wasn’t all that serious to begin with.”

On Tuesday, Tamar posted two voice recordings to Twitter, in which she discussed the matter further, calling it “a lot.”

“… I really honestly appreciate my family, you all of a sudden speaking up for me ya know, I appreciate that, and you know, it’s expected when you’re going through a breakup of families, you know, to choose a side and have things to say, it’s never positive,” she said. “ … I do feel compelled to say that it wasn’t a terrible relationship. David was an amazing partner to me, he was an amazing stepdad to Logan, he wasn’t a clout chaser, he wasn’t trying to be on TV.

“He did everything on TV and showed up for me because I asked him to and I don’t feel like majority of the things that are being said is warranted … ,” she continued. “What I went through this summer was very traumatic for both of us and he was there for me every step of the way, even when most people were not … .”

Merry Christmas to you and yours…from my two favorite gals, my fav guy and I❤️❤️❤️❤️

Tamar said she was not defending David to get back together with him, revealing that she hasn’t spoken with or seen David since August 30. Instead, Tamar said she was speaking out only to “do the right thing.”

“Unfortunately this is a situation where nobody wins,” she added. “We’re in a legal dispute and things are blown out of proportion and I just feel really bad for everybody, including myself.”

Tamar ended her message by saying she would “really like to heal privately.”

UPDATE: David’s rep has issued a statement to The Blast.

“David wishes the Braxton family nothing but the best and has moved on from this ordeal stronger. He’s focused on justice for Nigeria (sars) and releasing his app, Sootchy, that will address wealth disparity and help reduce educational debt within minority communities.”