From taking account for their actions to being taken into custody, the stars of the ‘Teen Mom’ franchise (both past and present) have been keeping themselves busy lately!

Kieffer Delp is No Longer on the Lam

Two months ago, The Ashley broke the news that Jenelle’s former soulmate (and proud felon) Kieffer was on the run, having been labelled an absconder by the State of Pennsylvania. After “Kieffa” stopped reporting to his parole officer, a warrant issued for his arrest in August.

The Ashley can confirm that Kieffer has been caught! He was returned to custody on Wednesday. It’s unknown what consequences he will now face for bolting on his parole terms.

As Kieffer said, “being a felon ain’t illegal.” However, running from the law certainly is!

Although Kail apologizing seems about as likely as David Eason getting a job, it actually did happen on Tuesday night.

After watching a scene play out on Tuesday’s episode of ‘Teen Mom 2,’ Kail issued a written apology to her nemesis, Lauren Comeau. The apology came after the airing of the episode, which featured a scene in which Kail exposed texts from her ex (and Lauren’s current boyfriend) Javi Marroquin that show him trying to hook up with Kail, despite the fact that he was in a relationship with Lauren at the time. (Click here for more on that!)

Anyway, after the episode aired, Kail took to Twitter and Instagram to apologize to Lauren because she realized that, in her effort to expose Javi, she also caused embarrassment for Lauren.

“I want to publicly apologize to Lauren in regards to tonight’s episode. She didn’t deserve the humiliation she was put through due to a situation between Javi & me. I’ve been in her shoes and I’ve felt that pain, however have never experienced that being exploited on tv.”

I want to publicly apologize to Lauren in regards to tonight’s episode. She didn’t deserve the humiliation she was put through due to a situation between Javi & me. I’ve been in her shoes and I’ve felt that pain, however have never experienced that being exploited on tv #TeenMom2

Kail also added that she addressed the issue with Lauren out of the public eye, too.

I did have a private conversation with her, but owe her a public apology as well. #TeenMom2

‘Teen Mom: Young and Pregnant’ dad Bar announced on social media this week that he is now a high school graduate, having completed his final tests to get his GED. He thanked his fiance(?) Ashley Jones for her support, even when he wasn’t motivated to get the degree.

“I got my GED if you know me you know how important this is to me, you know how I struggle day to day with mental s**t and life, you know the change I’ve been making!!!” he wrote. “If you don’t have yours GET IT it’s not as hard as it seems or as hard as I made it seem since it took me so long! Good luck 🙌🏽 #acheivement #GED #IFinallyDidIt”

(THE WEBSITE IS GED.COM… I’m answering questions on my story) I got my GED 😊if you know me you know how important this is to me, you know how I struggle day to day with mental shit and life, you know the change I’ve been making!!!…. if you don’t have yours GET IT it’s not as hard as it seems or as hard as I made it seem since it took me so long! Good luck 🙌🏽 #acheivement #GED #IFinallyDidIt

(Shockingly, no one pointed out that Bar had misspelled “achievement.”)

“I love you so much,” he wrote to her. “Thank you for supporting me through the last 5 years of me ‘about to get my ged.'”

He also shared his future plans to continue his education.

“Definitely [want to go to] college,” he wrote in response to a fan’s question. “I’ve been wanting to go to college since elementary school if that makes sense.” 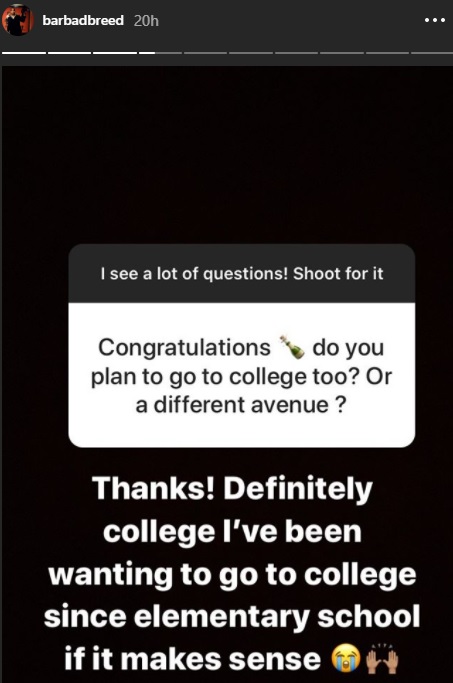 Bar also made it clear that he will have no problem paying his tuition. When one person asked him why he needs college and a real job if he makes as much money as he has claimed in the past, Bar clapped back.

Mackenzie McKee’s Dad is Struggling with His Health Again

Got to see our hero today. It was so good to see my dad cracking jokes and up talking. He put us through a scare this weekend. But if all goes well he gets to finally come out of the ICU tomorrow. We love you daddy. Keep on being strong.

‘Teen Mom OG’ star Mackenzie lost her mother last year to cancer, and is now facing health issues with her father, Brad Douthit, who had major heart surgery last month. According to new posts from one of Mackenzie’s aunt, Brad has been struggling in his recovery and his now back in the hospital and in a lot of pain.

On Wednesday, Mackenzie’s aunt provided a sad update on Brad’s condition after he acquired an infection.

“Brad is having a procedure done today to find out what kind of infection he has developed,” the family member wrote on Facebook. “It will be 4 weeks Thursday since his heart surgery & he hasn’t had much of any kind of relief at all. He is has been in constant pain. Pray with us that he can keep up the fight to make it through this.

“We talked last night about God giving his toughest warriors the toughest trials. I am afraid he is losing his will to fight, I can see it in his eyes,” she continued, later adding, “They don’t really know yet if it is actually an infection or what. They won’t know for a few days, & he will stay here in hospital during that time. They said he is having trouble healing because of being a type 1 diabetic, & put a vacuum on incision to help bring it together.

“Surgeon said he has never seen anything like the pain he is having in head & neck. It is almost like something is broken up there. He has said that is what it feels like, his collar bone being broken.”