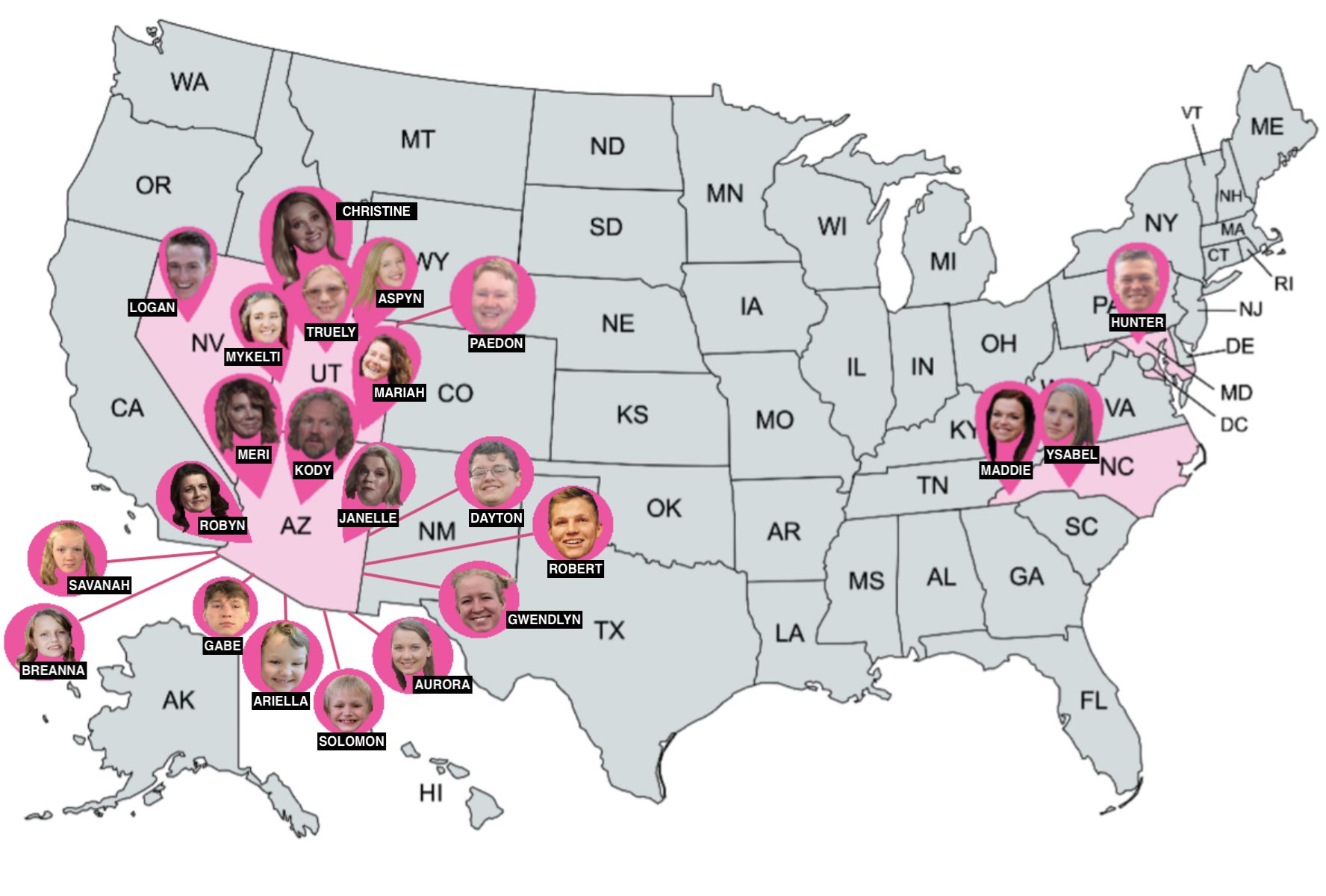 Kody Brown had dreams that most of his large, polygamous family would move into one large house on the family’s ill-fated Coyote Pass property in Flagstaff, Arizona. Unfortunately for the Sister Wives patriarch, his family was against living all together in a giant, polygamy mansion.

Just a few short years later, the Brown Family is literally scattered across the United States, with Kody’s third wife, Christine, even announcing earlier this month that she has left Kody (and her decades-long “spiritual marriage”) and moved to Utah.

With so many Browns in so many places, it’s hard to keep track of where Kody’s wives, former wives, kids and grandkids are currently residing. To help prepare you for the upcoming season of ‘Sister Wives,’ The Ashley has created this handy-dandy map showing the current locations of the Brown Family members, as well as updates on their lives.

(Please note: this map was made based on family member’s social media posts, as well as information provided on the show. It is up-to-date to the best of The Ashley’s ability. Keep in mind, though, that some major life changes may not be addressed until the new season.)

Kody & the Sister Wives: Where Are They Now?

Kody Brown: Currently living in Flagstaff, Arizona, and down to three wives. Still has an enormous ego and an enormous mess of curly blond frizz

Meri Brown: Currently living in Flagstaff, Arizona, (according to an Instagram Live she did on Friday); running her bed-and-breakfast in Utah and hocking the hell outta some Lularoe leggings. Still spiritually married to Kody.

Janelle Brown: Currently living in Flagstaff, Arizona; had been living in an RV on the family’s Coyote Pass property until recently. In a recent Instagram post, Janelle stated that she (and assumingly her minor daughter, Savannah), found short-term housing in Flagstaff for the winter, but that they plan to live on Coyote Pass in the RV next spring. Still spiritually married to Kody and currently hocking Plexus.

Christine Brown: Currently living in Murray, Utah, with her daughter Truely; recently left her marriage to Kody and stated that her life is “so great” now that she’s ditched Kody, his plethora of wives and his bad attitude. Christine currently sells both Lularoe and Plexus, and continues to maintain a close relationship with at least Janelle, with whom she recently did an Instagram video with. It is unknown if she is still close to Robyn and Meri.

Robyn Brown: Currently living in Flagstaff, Arizona, with her children. Has been completely silent on Kody and Christine’s split, which was rumored to have been caused, in part, by Robyn’s marriage to Kody.

The Brown Family Offspring: Where Are They Now?

Logan Brown (age 27): Currently living in Las Vegas, Nevada, with his fiancé, Michelle Petty. (They are planning to get married in October 2022 and are currently building a home together.) Logan has chosen not to appear on ‘Sister Wives’ for several seasons. He currently works for a Las Vegas start-up company.

Aspyn Brown Thompson (age 26): Currently living in Murray, Utah, (very close to her mom Christine and sister Truely); married to husband Mitch Thompson since 2018. Aspyn works as a manager of a retail store.

Mariah Brown (age 26): Currently living in Salt Lake City, Utah with her fiancé Audrey Kriss; they have not publicly announced a wedding date

Mykelti Brown Padron (age 25):  Currently living in Lehi, Utah, with her husband Tony Padron and daughter Avalon, who was born in April. She sells Lularoe like her mom and sister mom, Meri.

Hunter Brown (age 24): Currently living in Maryland and attending grad school at Johns Hopkins to complete his masters in nursing. Last year, Janelle stated that he graduated in the top 10 percent from the US Air Force Academy.

Paedon Brown (age 23): Currently living in St. George, Utah. Paedon is in the U.S. Army and apparently does not get along with some of his siblings. In 2020, he admitted that he and his sister Mariah “can’t stand each other,” due to their different political views, which set off an online battle between Paedon, and Mariah and her fiancé Audrey. Several months later, his younger sister Gwendlyn called Paedon an “idiot” and a “racist.”

Gwendlyn Brown (age 20): Currently living in Arizona; appears to be attending Northern Arizona University. Came out as bisexual in 2020

Ysabel Brown (age 18): Currently living in Greenville, North Carolina. Ysabel moved in with her sister Madison and her family in August, stating that she was starting a “new life” on the East Coast. Christine later stated that Ysabel is attending college in North Carolina.

RELATED STORY: ‘Sister Wives’ Star Christine Brown Reveals in Cameo Videos “Life is So Great” After Splitting From Husband Kody Brown: “I Had No Idea Life Could Be Simple”