Since being released from jail earlier in January, former Unexpected dad Max Schenzel has made it clear on social media that he and ex Chloe Mendoza are still on bad terms, and this week he continued to speak out against his ex, along with her mother, Jessica Bowman.

In statements posted to social media, Max exploded on Chloe and Jessica, denying their claims that he is no longer sober, and that he was abusive to Chloe. He also claimed that he desparately wants to be in his daughter Ava’s life, and that Chloe’s family has “ganged up” to take Ava away from him.

As ‘Unexpected’ fans may remember, the troubled 21-year-old was released from the slammer in January after serving more than three months for a 2018 incident in which he stole credit cards and casino vouchers from his friend’s grandmother while she was sleeping.

Max went on to get himself arrested again in early 2020, this time for a handful of felonies including auto theft and assault on a police officer. Before beginning his jail sentence, Max got into (yet) another social media feud with Chloe, during which Chloe claimed Max assaulted her and Ava. Chloe’s mom, Jessica, also jumped into the feud to deny that Max was sober (as Max had claimed). Chloe later released a YouTube video entitled, “Everything Max did to me with proof.”

According to Starcasm, Max is due back in court later this month for two separate domestic violence arrests – one from late 2019 and another from early 2020 – that resulted in Chloe obtaining an order of protection preventing Max from having contact with her or their daughter, Ava. (Currently Max still isn’t allowed to see Ava due to this order.)

“All I want is my daughter in my life and for [Chloe’s] family to stop [lying] about me to make themselves look better or to cause drama, honestly don’t know what their motive is,” Max wrote on Instagram Stories, adding that he feels Chloe’s family moved to Arizona so they “could gang up and take my daughter from me.”

“They are no better than me if I’m sober and they drink,” he wrote, adding that he frequently spends time with the three-year-old autistic son of his roommate’s girlfriend. (More on her in a sec…)

“What makes you think I’d not be good around my own daughter that I’m dying to see?” he added.

Max also took to social media to post multiple lengthy statements denying claims made by Chloe and her family regarding his sobriety and the abuse allegations against him.

One of the posts, shared by the TLC Unexpected Instagram page, shows Facebook comments from Max’s roommate Jason and Jason’s girlfriend Cassandra in which they are both defending the former ‘Unexpected’ dad.

Jason’s girlfriend Cassandra accused Chloe of obtaining an order of protection against Max “without any SOLID proof.” She also revealed that she is confident letting Max around her own child.

“ … and you guys have proof that he isn’t sober? Cool I’ll wait while I see something that ISN’T from some fake a** website,” she continued. “And I let Max around my 3 year old AUTISTIC son and he is AMAZING to my son and my son LOVES Max.”

Max added his own comments to the conversation.

“Nothing aggravates me more than when people try to say that I’m abusive and I’m a drug addict… first off I’ve been sober for a year,” he wrote. “ … Here’s some actual proof of me being good with kids and sober since some of you are dumb enough to believe what Chloe says.”

Max then began his multiple wordy posts in which he criticized Chloe for not letting him see Ava despite him “being a year sober with a full time job making great money” and renting a house with roommates. He also placed some blame on Chloe’s parents, whom he said never supported him, even before he “got into [his] addiction.” He also claimed he plans to take Chloe to court to change their custody arrangement for Ava.

“That’s why I need to get partial custody of Ava because I don’t want her growing up around that crazy ass family!” Max wrote, who added that he wants nothing to do with Chloe. “I just want to continue to do good and share my positive life I have now with my daughter. All I care about is her.”

Max’s reposted Instagram Stories garnered quite a few comments from ‘Unexpected’ fans, some of whom believed Max was in the wrong for blaming everything on Chloe and her family when he allegedly abused Chloe and Ava.

“I never touched my daughter in a abusive way. Ever,” Max responded to one of the comments. “I love that little girl to death and would do anything to protect her. If u actually read the article above you would see that a complete stranger trusts me with her autistic son so… “

When another follower suggested Max look into getting supervised visits with Ava, Max said he has been trying, but he maintained that supervised visitation was unnecessary. 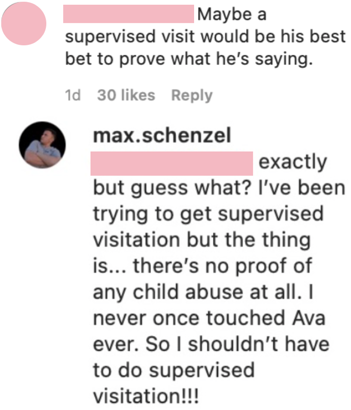 In between firing off on social media, Max also dropped a new video on his YouTube channel, detailing his time in jail and how he plans to change as a father.

“As Ava’s father I’ve pretty much, I haven’t been anything close to the father that I want to be since she was born,” he said. “I’ve had good moments with her obviously, I mean I love her to death, but my goal right now is just to stay on the path that I’m on right now with sobriety … working, staying in contact with my loved ones and friends – good friends, friends that will push me to do better, friends that will motivate me to stay sober, to stay on the right path.”

Max also apologized to those who had been rooting for him back when he was on ‘Unexpected.’

Chloe has yet to respond to Max’s latest comments, as she’s currently on vacation with her boyfriend, Ian. Jessica has not responded either, though she did post a photo of Chloe and Ian as the two kicked off their spring break road trip. 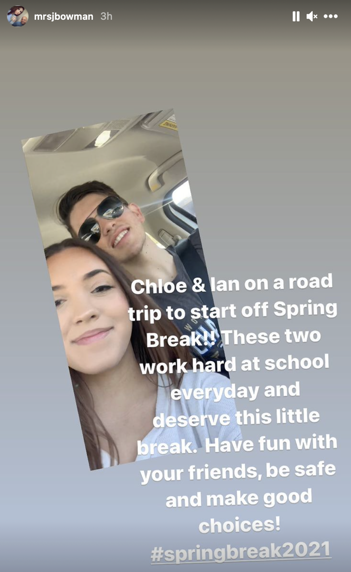