Prior to splitting with her fiancé Christian Biscardi, Sammi “Sweetheart” Giancola reportedly turned down a sweet deal from MTV, showing just how committed she is to living a more private life away from reality TV.

After the former Jersey Shore star announced her engagement in March 2019, MTV approached her, “offering to pay for her entire wedding if she filmed it,” a source told In Touch Weekly.

“She passed on this offer since she doesn’t want to be involved with ‘Jersey Shore’ and has moved on,” the source added. “She isn’t after fame and money anymore.”

As ‘Jersey Shore’ fans may recall, when the cast lineup for Jersey Shore Family Vacation was announced in 2017, Sammi was noticeably absent, presumably because she did not want to film with her ex-boyfriend Ronnie Ortiz-Magro, given the pair’s tumultuous past.

The following year, however, Sammi revealed that she decided not to participate in the show in order to focus on her “businesses and relationship” instead. She and Christian got engaged in 2019 and were planning for a wedding in Spring 2020 when the pandemic forced them to postponed their nuptials to September 2020. 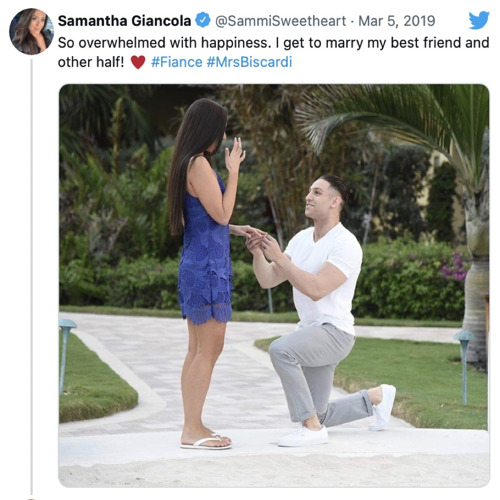 At the time of the postponement, Nicole “Snooki” Polizzi, Jenni “JWoww” Farley and Deena Cortese– a trio known for their questionable wedding behavior– said they hadn’t received invites to Sammi’s wedding and probably wouldn’t, as they had “drifted apart” from their former roomie.

After months of speculation, Sammi confirmed her split from Christian just weeks ago on TikTok, assuring fans she was both single and happy.

News of MTV’s alleged offer to fund the Giancola-Biscardi nuptials in exchange for filming privileges comes just months after Jordan Wiseley of The Challenge claimed the network had attempted to plan a wedding series featuring himself and then-fiancé Tori Deal, as well as other couples from the MTV franchise.

While a Sammi Sweetheart wedding special won’t be coming to MTV, the network may be able to work something out with Jenni, as she announced her engagement to boyfriend Zack Clayton Carpinello in March.

Sammi’s ex/former Shore House sparring partner Ronnie is engaged as well– to Saffire Matos, his partner of less than a year. However, Ronnie revealed in May that he was stepping away from the ‘Shore’ life to seek medical treatment for mental health issues, so plans to film the couple’s fist-pump down the aisle are likely on an indefinite hold.