From comparing themselves to royalty to being royally disgusting, the members of the Duggar Family have been keeping themselves busy lately!

In an effort to get you up-to-date on the latest Duggar and Counting On news, The Ashley brings you the Duggar News Pile. Here are some of the major (and minor but interesting) Duggar-related things that have happened over the last week or so.

Days after Meghan Markle and Prince Harry sat down with Oprah to spill the tea on the Royal family, Amy Duggar Duchess King, cousin to and frequent critic of the Duggar Family, says she can relate to Meghan’s claims of feeling “trapped and controlled.

I just watched the Oprah special with Harry and Meghan. In a very small way I can sympathize with her. I too wasn’t protected. I too felt trapped and unheard. I felt like there was no way out, I felt used, controlled and I was scrutinized.

“I just watched the Oprah special with Harry and Meghan,” Amy tweeted on Tuesday. “In a very small way I can sympathize with her. I too wasn’t protected. I too felt trapped and unheard. I felt like there was no way out, I felt used, controlled and I was scrutinized.”

Those who have kept up with the Duggar family may recall Amy earning the title of “rebel” cousin years ago after admitting she had premarital sex, criticizing the Duggar doctrine and more recently, offering support to Jill and Derick Dillard after they, too, distanced themselves from the Duggar crew.

(Amy is reportedly unable to speak about the Duggar family due to a non-disclosure agreement; however, it appears she’s in the clear so as long as she doesn’t mention anyone by name.)

In response to Meghan revealing during Sunday’s interview that she was suicidal at one point, Amy tweeted “suicide is never the answer” and that she is glad Meghan has found peace.

“I admire her grit, tenacity and her class,” she added.

Amy went on to tell her followers it was empowering to speak up and she encouraged them to do the same.

I went back and fourth asking myself “ Do I need to send this message out?” but the answer is yes. It’s so empowering to speak up!! I hope you will never be afraid to tell your story.❤️

“I went back and forth asking myself ‘Do I need to send this message out?’ But the answer is yes,” she wrote. “It’s so empowering to speak up!! I hope you will never be afraid to tell your story.”

Jason Duggar isn’t getting married to a Spivey. (At least not yet, anyway.)

The recent wedding of 18-year-old Justin Duggar to now 20-year-old Claire Spivey has undoubtedly brought their two families closer, but Claire’s mom Hilary Spivey says another Duggar-Spivey union isn’t happening, despite what some are assuming on social media.

Rumors of Hilary— who really, really, really loves the Duggars— gaining another Duggar son-in-law began after she posted a shoutout to 20-year-old Jason Duggar on social media.

“After a tough week of adjusting to Claire being gone…this guy walked through the back door Friday night,” she wrote. “What a surprise. We love you Jason!”

Hilary received a somewhat snarky comment on the photo from someone asking if she was “adopting this one as well” or “possibly arranging something” with her other daughter. Hilary overlooked the shady comment and denied that a potential courtship/marriage was in the works. 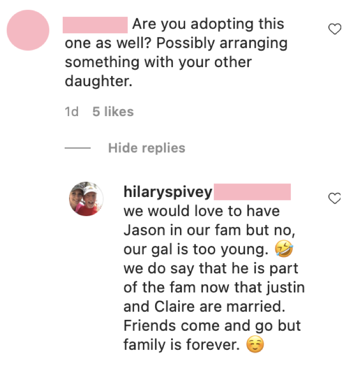 “We would love to have Jason our fam but no, our gal is too young,” she responded. “We do say that he is part of the fam now that Justin and Claire are married. Friends come and go but family is forever.”

Claire is the oldest of six children in her family and it appears that her younger siblings are quite a few years younger than her. The next Spivey girl is Paige, who is only 14 currently.

Coincidentally, this isn’t the first time Hilary has addressed rumors of arranged marriage between her kids and the Duggar family. In September – one week after it was announced that then 17-year-old Justin and 19-year-old Claire were in a courtship – Hilary denied claims that Jim Bob Duggar was the one pulling the strings behind his kids’ marriages.

“Jim Bob has never once arranged a marriage,” she wrote. “All of those kids have been equipped well for life. They can handle lots of responsibility at a young age, unlike most in society today. Justin’s daddy told him he knew he would marry young cause he was so responsible. Trust me…we’ve been blessed to know [the Duggars] for years.”

Jinger and Jeremy Vuolo made a video to show people their kids are OK, after they stopped sharing the kids’ photos on social media.

Jinger and Jeremy Vuolo likely eased the minds of concerned ‘Counting On’ fans this week when they appeared in a video for TLCme along with both of their daughters.

“Having a newborn in the family has been an adjustment, but I think we’re adjusting well,” Jeremy says in the video. “We all love her.”

Not long after welcoming their second daughter Evangeline Jo in November, Jeremy and Jinger began pulling back on the amount of photos shared of both “Evie Jo” and their 2-year-old daughter Felicity, and images that have been shared have not featured their daughters’ faces.

Fans have begun to notice the content change, with some even expressing their concern (and confusion) to the couple on social media.

“Maybe if for some reason you won’t post pictures of the girls could you at least tell us how and where they are and why you don’t want anyone to see them,” one person commented on a photo Jinger posted last week. 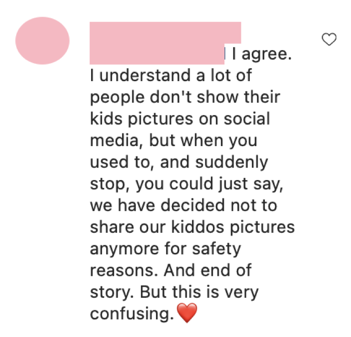 “I agree,” another fan added. “I understand a lot of people don’t show their kids pictures on social media, but when you used to, and suddenly stop, you could just say, we have decided not to share our kiddos pictures anymore for safety reasons. And end of story. But this is very confusing.”

Some suggested that Evie Jo was in ill health or had an ailment that the Vuolos didn’t want to share. (Jeremy and Jinger did share photos of the baby’s face when she was first born but have not shared any that showed Evie’s face since last fall.)

While Jeremy and Jinger did not address in the TLC update video their new approach to sharing content, they assured fans Evie Jo is “doing great” and everyone is adjusting well and enjoying their time as a family.

“Definitely a time of life that we’ll look back on as the good old days,” Jeremy said. “Just wanting to take it in and enjoy family time.”

In December, it was rumored that Jinger and Jeremy were having “deep conversations” about leaving ‘Counting On’;  however, their update video suggests they aren’t planning to part ways with the network anytime soon.

Jill Dillard wished her hubby Derick a ‘Happy Birthday’…by revealing all the disgusting things he lets her do.

Jill celebrated Derick’s birthday this week by writing a TMI birthday message on Instagram, in which she thanked him for letting her do disgusting things to him.

Although Jill and Derick love to talk about their sex life (how often the hump, how they like to hump, and what apps they like to use to help them hump, etc.) these “disgusting things” were not sexual. (Thank the Jesus God Jim Bob!) Instead, Jill talked about how grateful she was that Derick allowed her to pick, prod and pop his skin ailments.

Oh…and that he kept her right with The Lord.

“Thanks for continuing to point me back to Jesus!” Jill wrote on Instagram. “Oh, and thanks for listening well, atuning to me, bringing me coffee in bed every morning, fathering our kiddos, keeping me laughing, finding all the good YouTube vids, calming my crazy & letting me pop all the pimples & peel all the sunburns lol.”

This is almost as gross as the time we had to watch Jim Bob hump Michelle on the mini golf course on 19 Kids & Counting.

To catch up on more of the latest Duggar news, click here!