From breaking up to breaking down fat-shaming, the stars of the Teen Mom franchise (both past and present) have been keeping themselves busy lately!

In an effort to get you up-to-date on the latest Teen Mom OG, Teen Mom: Young & Pregnant and Teen Mom 2 news, The Ashley brings you the Teen Mom News Pile. Here are some of the major (and minor but interesting) ‘Teen Mom’-related things that have happened over the last week or so.

It’s over (again) for Jade and her baby daddy Sean!

The on-and-off ‘Teen Mom 2’ pair is off again, just a month after Jade posted photos from a sexy time couples’ photoshoot and proclaimed on social media how proud of Sean she was.

“Loving you has always felt so right,” Jade wrote to Sean at the time. “I’m so proud of you… You’ve proved people who’ve mad mistakes can change, evolve, improve, and learn. It hasn’t always been easy but it’s always been worth it. Cheers  to us and forever.”

Jade—- who, as you may remember, posed for Valentine’s Day photos with her in red lingerie and Sean shirtless and in red pants (as you do)— revealed in an Instagram Live Q&A session on Wednesday that she and Sean have split. She also reacted when a fan told her that Sean is already allegedly trolling Tinder (to find another woman to pay for photos of him posing shirtless, we can assume).

When Jade was asked if she was single, she replied, “Yasssss.” She also got a good chuckle after finding out that her ex was is allegedly on The Tinder.

“IM SCREAMINGGGGG they can have him lmaooooooo,” she replied. 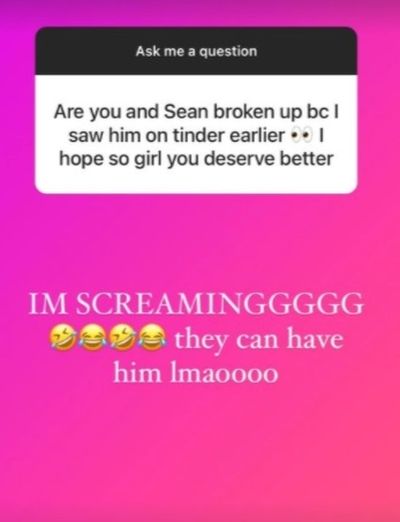 Although Jade had previously hinted that she and Sean might have gotten married earlier this year, she confirmed that statement was false.

“LOL I never got married,” she wrote.

“The right decisions sometimes aren’t the easiest and it sucks but whatever lol,” Jade wrote. “Just know I’m doing me.”

Sadly (for us), all traces of Jade and Sean’s satiny lovefest photoshoot have been deleted from Jade’s social media.

Jenelle recently explained the reasons her husband David fat-shamed her former ‘Teen Mom 2’ star (and current nemesis) Kail Lowry back in May 2020.

In an interview with In Touch Weekly, Jenelle stated that David made fun of photos showing Kail in her bathing suit because he wanted to hurt her after she talked about him on her Coffee Convo podcast.

“I feel like David and Kailyn went at each other a lot. So, I think it was more like David wasn’t trying to say anything about her image, but more hurt her feelings at that time,” Jenelle told the magazine. 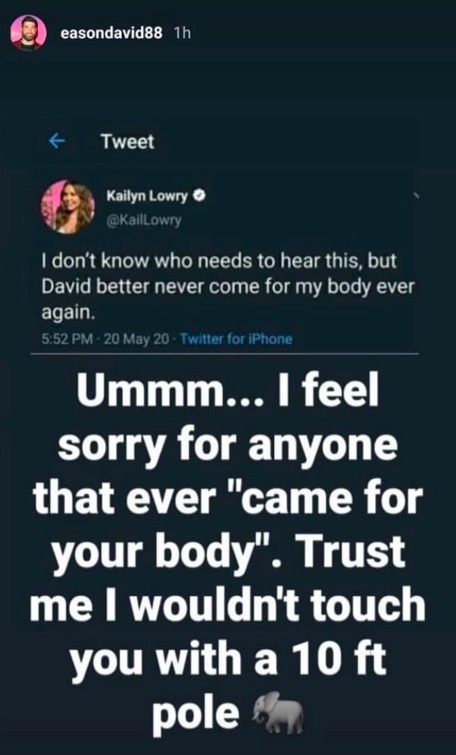 She then stated that David isn’t exactly The King of Svelteness himself.

“He’s not the skinniest guy and he knows that,” Jenelle said.

In fact, according to Jenelle, David only made fun of Kail’s weight because he needed to find an outlet to get back at Kail after he was spoken about on the podcast.

“He was trying to say something to hurt her feelings because she was doing the same through her podcast,” Jenelle said. “And David felt like he didn’t have a voice.”

Jenelle swears, though, that David isn’t the voiceless, fat-shaming man he used to be.

Here we are again. Another spring and we’re still watching the same girls (plus a few new additions) dealing with the same crap from the same guys. You’d think that 1) MTV would finally realize that they’ve milked these cash cows dry of literally every last drop and/or 2) we would have gotten lives ourselves and stopped watching this junk but… here we are.

This week, MTV released the first trailer for ‘Teen Mom 2’ Season 10B and it’s quite…underwhelming, even for ‘Teen Mom.’

The trailer starts by declaring the moms to be in “full bloom.” Because it’s spring, get it?

Anyway, we see Jade saying she doesn’t want to marry Sean; Leah talks about  needing an ultrasound; and Briana getting a tattoo from her boo in what appears to be some sort of garage (as you do).

The 30-second clip also introduces Ashley Jones, who will be joining the ‘Teen Mom 2’ cast for this season.

In terms of excitement, watching this trailer is equivalent to watching the paint dry on Kail’s 300th newly redecorated home. Who would have guessed that we’d someday long for the days of Barbara shoveling laundry baskets of crap out of her house and screaming at Jenelle to “GET OUT! GET OUT!”

In case you’re one of the dozen or so people who are excited for this new season to start, it will premiere on Tuesday, May 4 on MTV.

You can watch the trailer below!

After a considerable amount of run-around from production, the Teen Mom: Young & Pregnant cast finally learned in the fall that they were getting a Season 3. However, now they’ve been left wondering when the season will see the light of day.

While doing a Q&A on Instagram this week, Kayla Sessler revealed that Season 3 was supposed to premiere next month after ’Teen Mom 2,’ but now she’s being told it won’t air until August. Kayla claimed the cast was getting the run-around (again) because they don’t receive the same treatment as the other ‘Teen Mom’ shows.

“MTV doesn’t treat Y&P the same way they treat OG & 2 and then wonder why our ratings aren’t where they should be,” she said. 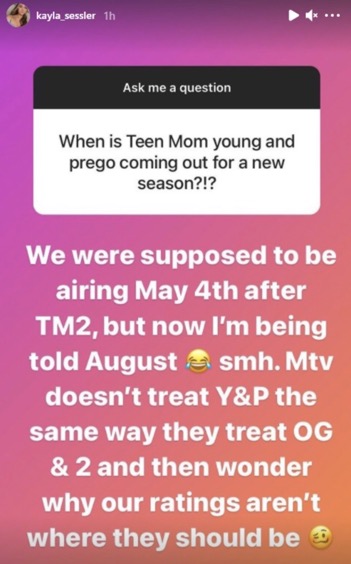 Kayla assured fans that she’s “trying” to hurry things along, adding that ‘Young & Pregnant’ has “been off air for wayyyy too long!” 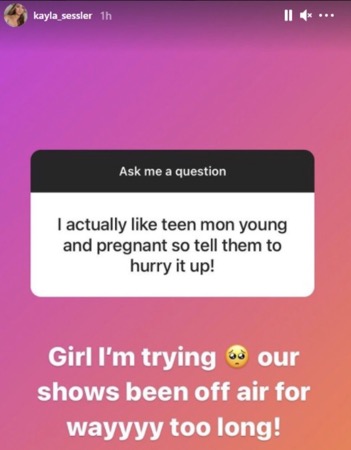 As The Ashley told you in December, filming for ‘Young & Pregnant’ had be shut down temporarily on four of the five girls’ stories due to COVID exposure; however, Kayla did not comment on whether or not that contributed to the delayed Season 3 premiere.

Kayla did confirm that she finished filming in December and, although she doesn’t have a sneak peek for fans, she promised them “it’s by far the most drama filled season” she’s had. 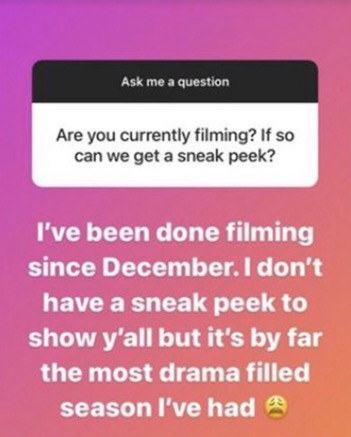 Some of the girls, such as Rachel Beaver, continued to film for the season up until recently.