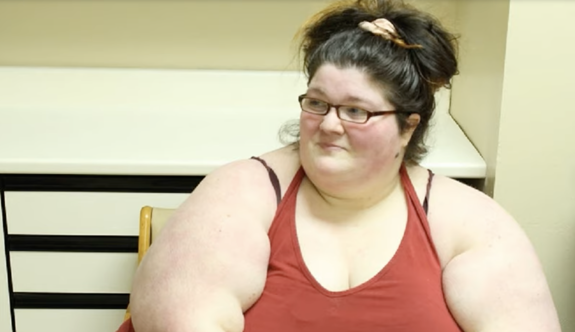 Gina Krasley of My 600 Lb. Life (Season 8) passed away August 1, just weeks after revealing she was suffering from an unidentified illness that had left her completely immobile.

According to the Daily Mail, Gina recently revealed the mystery illness had not only left her unable to move, but also battling severe leg pain and numbness in her fingers. She claimed at the time to be receiving medical care at her house, with plans to meet with a neurologist July 29.

It is unknown if Gina was able to attend her neurology appointment, as she sadly passed away two days after her scheduled appointment.

The 30-year-old is the ninth person featured on the TLC show to pass away after their episode was filmed.

On “My 600 Lb. Life,” Gina, who appeared on the show with her wife Beth, struggled to stick to Dr. Nowzaradan’s diet plan, only losing 51 lbs. by the end of her episode. However, Starcasm reports that in the months after her episode aired, Gina told fans on social media that she had managed to lose another 150 lbs.

It was also revealed after episode aired that like many other former stars of the series, Gina had filed a lawsuit against “My 600 Lb. Life” production company Megalomedia for alleged negligence.

In her lawsuit, Gina accused the production company of causing her distress on set, failing to provide proper healthcare services and also of actively encouraging her to eat to make it look as though she was intentionally ignoring her doctor’s advice.

The first lawsuit against Megalomedia was filed in January 2020 by L.B.’s family, who alleged “gross negligence” against the production company.

In April, Megalomedia filed a formal petition to have Gina’s case dismissed, as well as the lawsuits filed by David and Maja.

Prior to Gina’s death, Coliesa McMillian (Season 8) was the most recent cast member to pass away; the 41-year-old died in September after suffering complications from weight loss surgery.

“TLC was deeply saddened by the loss of Gina Krasley, who shared her weight-loss journey on ‘My 600lb Life,'” the network tweeted. “Our thoughts and prayers are with her family at this difficult time.”

TLC was deeply saddened by the loss of Gina Krasley, who shared her weight-loss journey on My 600lb Life. Our thoughts and prayers are with her family at this difficult time.

RELATED STORY: “My 600 Lb. Life” Returns for Season 9 After a Year of Lawsuits & Two Cast Member Deaths: Watch the First Trailer of the New Season