Babies, Teen Mom: Young & Pregnant
1 month ago by The Ashley
10

There’s a new Beaver being added to the family dam!

Malorie Beaver— the sister of Teen Mom: Young & Pregnant star Rachel Beaver— announced on Monday that she is pregnant with her second child. As ‘Young & Pregnant’ fans know, Malorie is already the mother of almost-four-year-old daughter Emerson, whom she shared with Lane Fernandez (who recently passed away.)

Anyway, 22-year-old Mal and her man, Achilles Crowe, officially announced Malorie’s pregnancy on the Fourth of July, using fireworks to also reveal the baby’s gender. In photos and videos posted by Malorie and her mom, Stephanie Polo, Malorie and Achilles are shown lighting a “gender reveal fireworks box” (with what looks like a can of beer on top of it, as you do…)

Steph and the rest of the Beaver Clan are heard hootin’ and hollerin’ in the background as a series of fireworks shoot out, with the finale being all blue fireworks to indicate that Malorie is having a boy. Achilles appears to be thrilled with the news, dropping to his knees as he finds out he’s having a son.

This will be the first baby boy in the new generation of Beavers. Like Malorie, Rachel has a daughter– Hazelee.

“What are we going to do with a boy?!” someone— who sounds like Rachel— can be heard yelling excitedly in the video.

Malorie (and her mom) had hinted that Mal was once again “with child” over the past few days. Last week, Malorie posted to Snapchat and wrote that she was pregnant, but many thought it was a joke, given the way she wrote it. 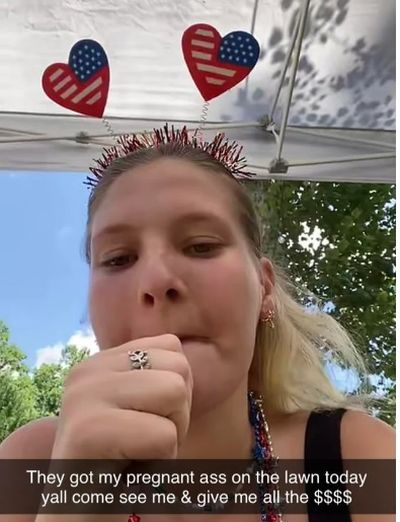 Several days later, Stephanie told fans during a ‘Teen Mom: Young & Pregnant’ “Grandmas” Instagram Live that Malorie had some big news that would be revealed soon.

Malorie and Achilles have been dating since last fall, but it’s unknown how much he will appear in the currently airing season of ‘Teen Mom: Young & Pregnant.’ In February, Mal expressed her love for Achilles in a Valentine’s post on Instagram.

“You stole my heart from the moment I met you & you mean the absolute world to me. You have never even changed a diaper before but chose to help me raise my daughter. For that I will forever will be grateful,” she wrote.

It is unknown when Malorie and Achilles’ baby is due.