CABS ARE HERE… and Nicole “Snooki” Polizzi is hopping into one and leaving Jersey Shore: Family Vacation behind.

Nicole took to her podcast It’s Happening With Snooki & Joey on Friday to share that she’s “retiring” from the MTV show, calling the move “definitely a hard decision.”

“I’m gonna throw up,” she said during the episode. “OK, you guys, I love you so much and don’t hate me for my decision, but I have to do what’s best for me at the moment and I am retiring from ‘Jersey Shore.’”

Nicole went on to say if there is a Season 4 of the reality show, she won’t be part of it due to “a lot of reasons,” including having to leave her kids to film, which she said is “really, really hard.”

“I just can’t do it anymore … I hate being away from the kids,” she said, later adding, “[it’s] supposed to be a happy, fun show and it’s turning into a nightmare.”

Nicole also stated that her hard-partying “Where’s the beach?” days are long over, and it’s hard for her to leave her family to go pound Ron Ron Juice.

“I don’t like partying three days in a row, it’s just not my life anymore and I wanna be home with the kids,” she explained. “It’s just really hard on me to leave the kids and film the show. That’s one reason.”

Another reason she’s ready to throw in the towel? The drama.

“Our show, ‘Jersey Shore,’ is about family and about making fun of each other and having a good time and laughing and just knowing that it’s all in good fun,” she continued. “And lately, it’s just like, everything is so serious and when it comes to our show it’s not like, team this, team that, and then the fans are against one another when it comes to a cast member. That’s just not how the show works and that’s how it’s becoming.”

In addition said she wasn’t comfortable with “the direction” the show is moving in and that she needs some time for herself.

(Although she didn’t specifically mention it, Nicole may be referring to the recent drama that was stirred up at her co-star Angelina Pivarnick‘s wedding. As The Ashley previously reported, Nicole, Jenni Farley and Deena Cortese received a ton of backlash after audio was leaked of them giving a very cruel bridesmaid toast at the wedding. Nicole never addressed the incident and has not apologized for her part in it.)

“I don’t want that and I’m not leaving my kids days on end to film this show when that’s the result of it,” Nicole said on the podcast. “I don’t like the turnout of it and I don’t like the person I’m being portrayed as and this is getting a little too much. 32 years old with 3 kids and if I’m doing a reality show I want it to be fun and lighthearted and just lately it’s not like that and the show is getting so dramatic and drama.”

She also revealed that she and her children have received death threats over her involvement in the show.

“It’s just a lot and it’s not something I signed up for with this show,” she added.

A month ago, Nicole vented her frustration over the way reality TV is edited after she was seen having a total meltdown during an episode of ‘Jersey Shore: Family Vacation.’

Ok my drunk ass is going to sleep. All i have to say is , editing on a reality show is a bitch. I will speak the truth one day with a full , tell all documentary. Until then, enjoy your Pinot and dramer!

She previously said her actions on the episode were a result of her missing her children, as well as her anger over Angelina “giving [her] crap.” When defending her habit of pulling the “I’m going home” card on the show, Snooki joked on Twitter that she craves the money and how the show has benefited her children.

“I enjoy allowing my kids to eat and have college funds off of my a**holery,” she said.

Despite her roommates attempting to talk her “off a ledge” regarding her decision to quit the show, Nicole reiterated that “the show isn’t what it was,” though she made a point to say there were no “hard feelings when it comes to the production, or MTV” and that she hoped to “work with them more.”

Even though her days on the Shore may be done, Nicole wishes her roomies well as the show moves forward… hopefully without all of the drama.

“I don’t like the narrative of anything, I’m removing myself, I love you guys so much, I love my roomies to death, they know that, I’m not going anywhere when it comes to them and them being my family,” she continued, noting that her decision to leave doesn’t mean she’s done with TV or reality TV entirely.

Following the news of Snooki’s departure, Jenni shared a photo of the two of them to her Instagram Story, captioned “Til the end… #rideordie.” 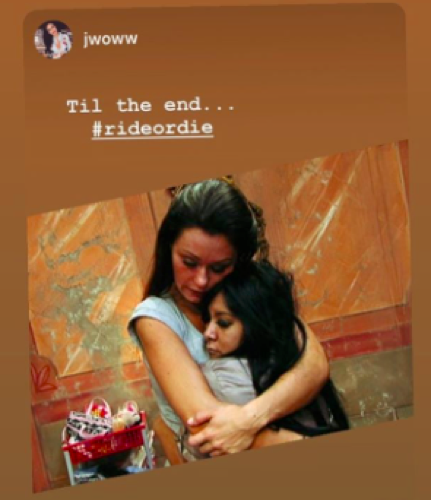 Nicole herself posted a selfie-shoutout to her fans, telling them how much she loves them. 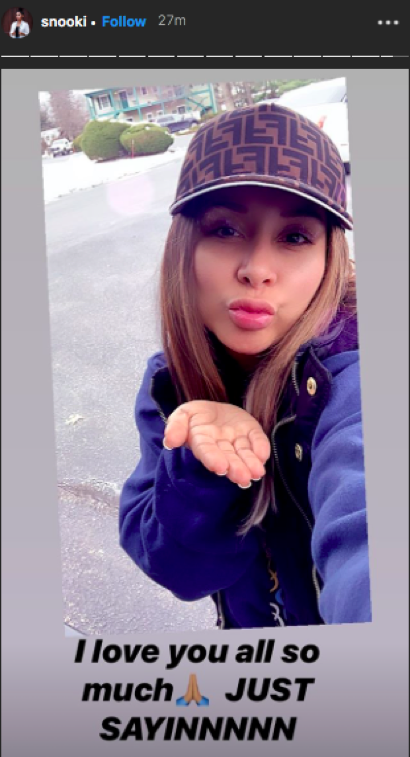 …And for anyone under the impression that Nicole plans to also leave New Jersey, that’s not the case. After a Twitter user shared a premature celebration about the Meatball relocating out of The Garden State, Snooki went ahead and set the record straight.

“I’m still here in Jersey Mary, and will always be. Come at me, bruh.” 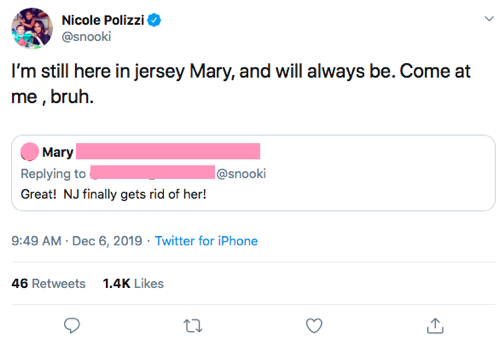 RELATED STORY: Angelina Pivarnick Thanks New Husband Chris Larangeria for Being Strong for Her During “Difficult Times” After Her ‘Jersey Shore’ Co-Stars’ Wedding Roast